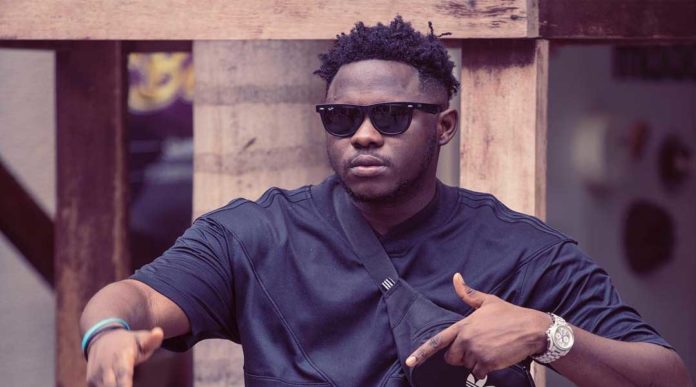 Rapper Medikal yesterday took to social media to mock his fellow rapper and senior in the music industry M.anifest.

According to Medikal, the God MC songs hit or gets attention only when he disses Sarkcess CEO Sarkodie and wondered what would happen to M.anifest’s career when Sarkodie is no more doing music.

He tweeted: “The only time your music gets attention is when you diss Obidi, so if Obidi stop de do music you die be that ????”

Also Read: The only time your music gets attention is when you diss Sarkodie-Medikal jabs M.anifest

Even though one can say the tweet is just a satiric comment been made by the AMG rapper, a strong fan of M.anifest has also replied to him for saying that about his favourite rapper.

The fan identified as Brian Of Tafo, replied to his tweet saying “I hope MDK admits that his music also gets attention when he dates celeb girls. When he realizes the hype is dying then he jumps to another popular chick. He’s like how the Kardashian girls be with Black NBA players.” 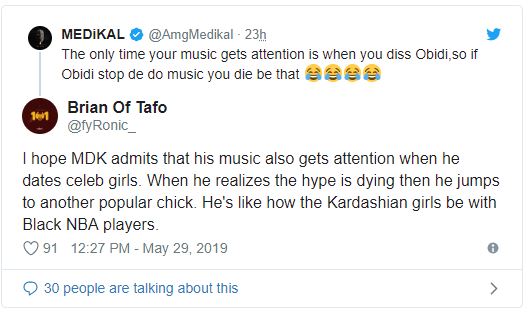 Also Read: Rapper 101 is not a diss to Sarkodie – M.anifest

Another fan with the handle @_Jvrvis also commented and said there was no need for Medikal to send out a tweet like that because he can’t even face off with M.anifest when they meet to battle.

He tweeted: “This thing you tweet no need. Wey the one everybody figa you dey refer to saf, you no fit go bar for bar plus so abeg choq for your corner” 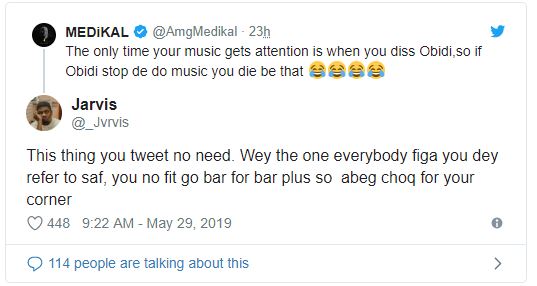