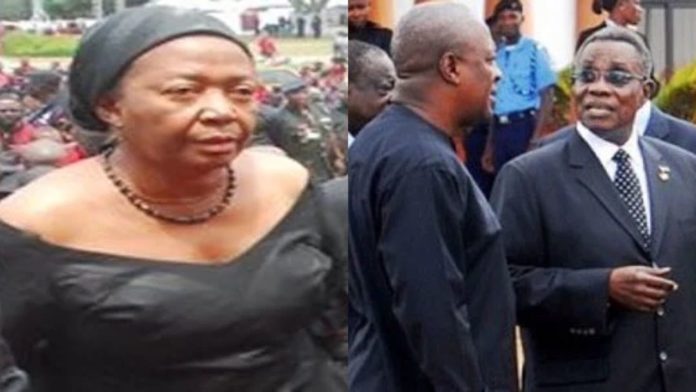 The former First Lady and wife of the late Prof. JEA Mills has made some pronouncements on what led to the unfortunate yet painful death of the former president of Ghana.

On 24 July which marked 10 years after the demise of Prof JEA Mills, Madam Ernestina Naadu Mills intimated that his husband was bruised, tortured and battered to death.

Mrs Naadu Mills read this revelation at the 10th Anniversary Commemorative Lecture on the theme “The Man John Evans Atta Mills-Ten Years On.”

…Fiifi was often battered and bruised on the battlefield of politics but he held firm to his values of truth, simplicity, honesty and abiding respect for all. These were the qualities I loved about him.” she said [reported by Joy News].

Although the cause of Prof JEA Mills’ death other than he was severely sick has not been revealed to the public, there have been pockets of speculations concerning what killed him.

Friends, confidantes and family members have sometimes pointed fingers accusingly at the negligence of one party to the other. Other names have been featured as people who potentially had a role to play in JEA Mills’ death directly or indirectly.

Mrs Mills revealed that serving at the highest levels of government was an opportunity for her husband to help change the character of Ghana politics for the better.

So she believes that posterity will honour him for his sacrifice for his country.

She has, however, lamented the fact that she has been alone for ten years since the death of the late President, who was her friend, husband, and confidante.