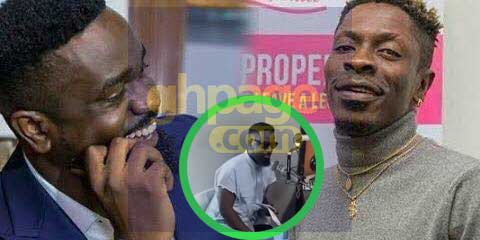 SarkCess music CEO, Michael Owusu Addo known in Showbiz circles as Sarkodie has made an interesting revelation, detailing how his mum always talk to him and self-acclaimed dancehall king, Shatta Wale concerning their line of work.

Sarkodie in an interview with KOD on Starr FM shed more light on his relationship with Shatta Wale before and after he released a diss song for him prior to his[Shatta Wale] album launch.

The song dubbed “My Advice” was weaved as a reply to Shatta’s numerous diss comments made on the rapper through his reign album launch journey.

In the interview, King Sark also known as Obidi revealed that although he has a problem with the way Shatta Wale is fond of stepping on people’s toes, he’s cool with him in the aftermath of his diss song.

The SarkCess CEO also revealed that his own mom has been talking to the both of them on regular basis, adding that he sees him as a brother, just like the late Castro.

Read also: ‘You don’t brag when you are pushing others down’ – Sarkodie advice Shatta Wale again

“You don’t brag when you are pushing others down. It’s showbiz but don’t try to step on other people. And these are things we have discussed on the phone many times,” he said.

“The fact is I’m not into this fake industry thing so I don’t really open up to people but I’m really cool with Shatta just as it was with Castro. The truth is I do care about him (Shatta), my mum talks to both of us on the phone and we can be on phone for hours,” he added.

Read this: Sarkodie explains why he composed ‘My Advice’ song for Shatta Wale