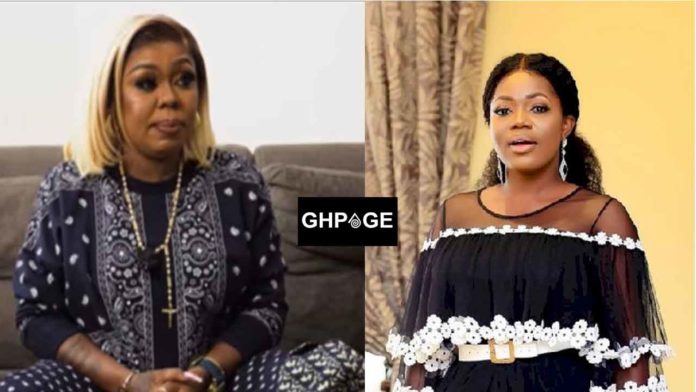 Mzbel is currently the happiest person in the country at the moment following Chairman Wntumi’s benevolence on Delay.

Recall that last Friday, it was a double celebration for Delay as her boss Chairman Wontumi financed a second private party to mark her birthday.

The iconic TV and Radio personality, whose real name is Deloris Frimpong Manso, turned 40 on 24 June and shared stunning photos on social media to mark this milestone in her life.

It was during the birthday party that Chairman Wontumi indirectly revealed why she chose Delay over the others who wants to work with him.

READ ALSO: Chairman Wontumi reveals why he chose Delay over the other female presenters

After Chairman Wontumi dropped these comments, many social media users concluded that it was an indirect shade at Afia Schwar.

Well, Mzbel has joined the bandwagon to ridicule and make a mockery out of the whole situation.

In a new video that has been spotted on Mzbel’s IG page, she borrowed Nana Tornado’s words (Bara & Asibolanga) to dirty Afia Schwar.

Apparently, the video was purposely made to scorn Afia Schwar that despite all the dirty tactics she employed, she wasn’t able to ruin the beautiful relationship between Dealy and Chairman Wontumi.

Will unforgiving Afia Schwar reply to Mzbel’s indirect attacks on her or she will allow things to slide?