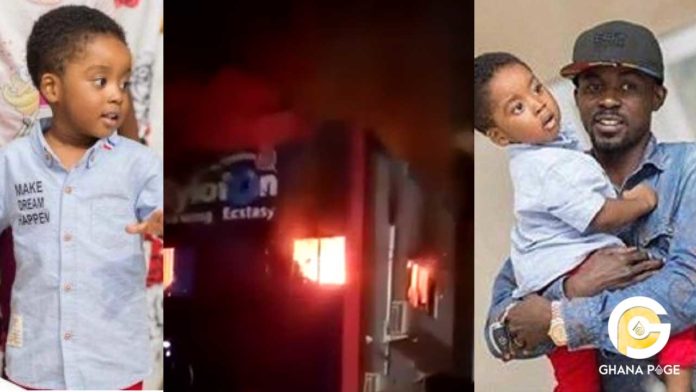 Embattled businessman and the CEO of Zylofon media Nana Appiah Mensah and his son have been spotted in a video fast going viral talking about the fire that destroyed his plush Zylofon TV and FM building last Monday.

In the video, NAM1’s son literally expressed hope in father to extinguish the fire that caught the offices of Zylofon TV and FM on the night of Monday, November 25, 2019.

As earlier reported by Ghpage.com, the building housing NAM1’s TV and radio stations caught fire and led to a break in transmission for some hours.

After much effort from the Ghana National Fire Service (GNFS), the fire was brought under control and quenched without any casualties.

In a rare public appearance of NAM1 was son, the child ha reacted to the fire incident describing his father as a firefighter in a new video.

In the video, NAM1 is seen wearing a helmet like a that of firefighters and the son could be heard saying: “Hello, guys my daddy is a firefighter.”

NAM1 then chipped in the sentence “and we will put out the Zylofon fire” with the little boy saying “yeah.”

NAM1 Junior went on to add that his father did not call him to help out when the Zylofon fire started.