Menzgold security attacks pregnant TV3 journalist, Nana Akua Mensah Aborampah and others who went to the premises for reaction following the SEC order of closure 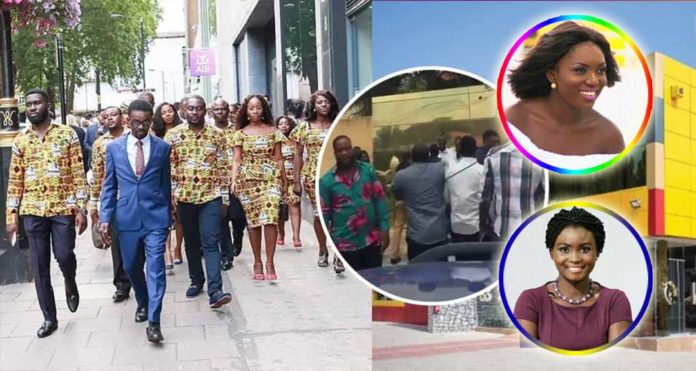 In an audio obtained by GhPage.com, MenzGold security personnel could be heard assaulting reporters at their premises who were later identified as visibly pregnant Nan Akua Mensah-Aborampah from TV3 and Kareen Dodoo from Multimedia.

In the audio, Nana Akua Mensah Aborampah could be heard begging and pleading with the security officers of Menzgold to stop manhandling her because she is pregnant.

From what Ghpage.com has gathered, the two female presenters from the two media giants went to the Menzgold head office at East Legon to seek their reaction to the order of closure from the Securities and Exchange Committee.

SEE ALSO: Menzgold closed down by Securities and Exchanges Commission

Unfortunately, they were met by angry Menzgold security personnel in suit and tie who pounced on them, seized their camera and other equipment and roughly manhandled them.

The reporters including heavily pregnant Nana Akua Mensah-Aborampah had to engage the security personnel in a scuffle to protect herself and her unborn baby.

SEE ALSO: Management breaks silence on the close down of Menzgold

They were only saved by a management member of Menzgold, Pious who ordered the security personnel to stand down. He apologized to the pregnant reporter and her colleagues who were then walked out of the premises.

Yesterday, news went viral that the Securities and Exchange Committee (SEC) has ordered Menzgold to shut down because they have violated their operating permit.

“Accordingly, the SEC hereby directs Menzgold Company Ltd to shut down immediately the business of trading in gold collectibles with guaranteed returns to clients which constitutes, in essence, dealing in securities with neither the necessary license nor disclosures authorized by the SEC. No new contracts should be created and all advertising of the investment business halted with immediate effect.”

SEE HERE: Menzgold closed down by Securities and Exchanges Commission

Initially, Menzgold put out a statement rubbishing the statement but they later put out another statement stating they will comply with the directive.

Since yesterday, hundreds of customers of Menzgold have thronged the places to withdraw their deposit for fear of losing their deposits.