NAM1 showers praises only Stonebwoy among the Zylofon artists 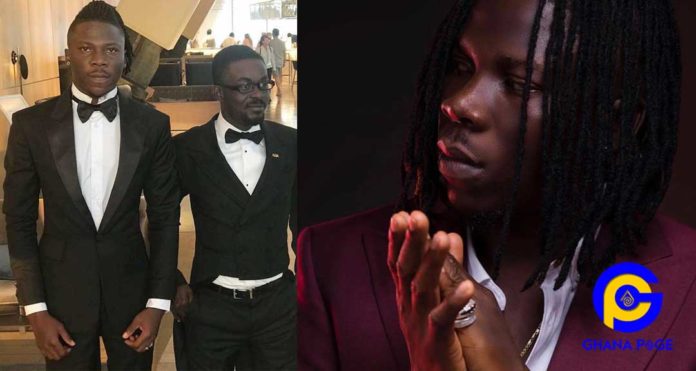 The embattled CEO of Menzgold, Nana Appiah Mensah has singled out Stonebwoy among all the musicians and actors on his record label to shower praises on him for his staunch and unflinching support during his media trial in Ghana and also his court trial in Dubai.

In his second post ever since he was supposedly released from jail after the Dubai court pronounced him not guilty, NAM1 thanked Stonebwoy and assured him he will bounce back even stronger soon.

The CEO of Zylofon Media, Menzgold, and host of business, Nana Appiah Mensah aka NAM1 posted on IG:

God bless! Stonebwoy. U’re spot on bro. Soon I and I wud sit again in Jerusalem upon the still waters and sing the songs of Zion. Keep d faya blazin, abwoy. Pepper dem’. Jah!rasta farai?

A few days ago, Stonebwoy again passed a comment on the ongoing brouhaha between his boss, Menzgold customers and the government of Ghana. According to Stonebwoy, NAM1 is not a criminal and he is not being treated fairly.

He stated boldly in an interview that the government should prove to Ghanaians NAM1 is a criminal if indeed they want Ghanaians to believe he is. He cautioned Ghanaians to be careful how they treat Nana Appiah Mensah because he was a visionary and created jobs for thousands.

SEE ALSO: NAM1 is not a criminal, the government is not treating him fairly-Stonebwoy

It is a fact that the Zylofon Media artists who benefited from Nana Appiah Mensah most abandoned him when he was caught in his fracas with SEC and Government of Ghana. Only Stonebwoy and few others like Kumi Guitar have stayed loyal to the rich man.