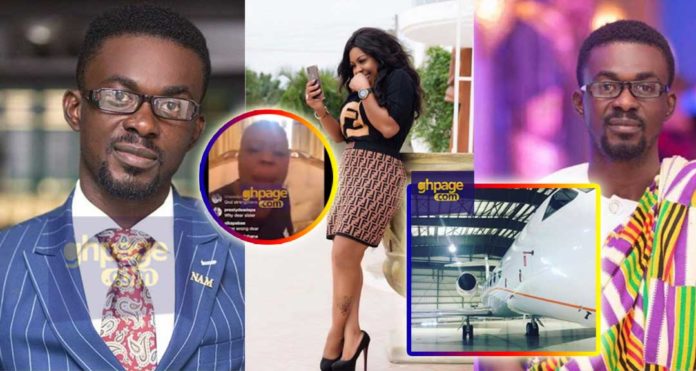 Outspoken media personality, Valentina Nana Agyeiwaa best known as Afia Schwarzenegger has once again hit hard at Nana Appiah Mensah, the CEO of Menzgold. According to Afia Schwarzenegger, it’s only fools who do not know NAM1 is a thief who has gone to rent a private jet to flex.

SEE ALSO: NAM1 is hiding in Nigeria after ‘stealing’ millions of money

Afia Schwarzenegger in a video obtained by Ghpage.com claims Nana Appiah Mensah aka NAM1 has scammed millions of Ghanaians and he has run out of the country to Nigeria.

Taking a swipe at those Standing with NAM1, Afia Schwarzenegger stated: “It’s only fools who do not know NAM1 is a thief who has outsmarted people of their money”.

SEE ALSO: NAM1 Exposes Ibrah One – Explains why he has been ‘hating’ him all these years [Read their WhatsApp Chat]

Afia Schwarzenegger also stated that NAM1’s private jet is not his and he rented it from a company in Delaware, USA to flex and to boost investors confidence but it all part of the scam.

However, Nana Appiah Mensah, today shared documents to prove he is the original owner of the documents and he never rented the private jet from any company.

SEE HERE: NAM1 hits back at critics – Publishes a letter to confirm he is the rightful owner of the Private Jet [READ]

Meanwhile, the Securities and Exchange Commission has ordered Menzgold to shut down for violating operational permit. Menzgold has since met with the SEC. Investors are waiting on the 28th September deadline from the company to know the way forward.

SEE ALSO: A Guy claiming to be the brother of NAM1 puts Afia Schwarzenegger, Kennedy Agyapong and Ibrah one on blast [Watch]