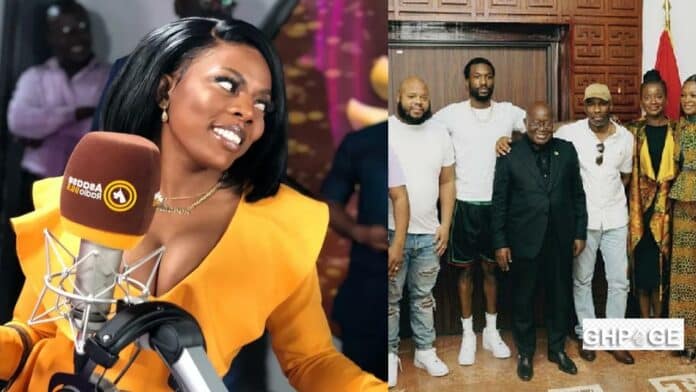 A lot of Ghanaians including Members of Parliament have added their voices, registering their utmost displeasure over the video.

Ghanaians on social media have expressed their anger at what they describe as disrespectful and unacceptable behaviour by Meek Mill.

In a tweet by the Ghanaian Media personality, she claims to be very confident that the president was unaware of Meek Mill’s videotaping inside the Jubilee House.

“I can bet my last coin that the President knew absolutely nothing about that shoot,I however, doubt anything will happen to whoever authorized it (if they decide to investigate how Meek Mill desecrated the jubilee house that way).”

In another related news, NPP’s Mustapha Hameed has slammed critics of a video shot by Meek Mill at the Jubilee House in Accra which has attracted public anger and criticism.

According to the government communicator, Mustapha Hameed, Ghanaians should appreciate Meek Mill for “projecting Ghana and the seat of governance to the whole world”.

“I have seen the Meek Mill video. It’s actually beautiful, I love it. I thank him for projecting Ghana and the seat of governance to the whole world. Ghana is opened, more people need to come in and bring in their investments too.”

“I am here to also tell you, your anger is misplaced, nothing but waste of emotions. You’re only angry because people your follow seem angry lol. Storm in a tea cup, mountain out of a molehill.” He added.

“We thank God that Meek Mill saw value in the Jubilee House, took photos and some short clips and added them to his freestyle video for the whole world to see the magnificence of such a beautiful edifice.

There are people in this country who don’t see any value in that building, turned it into a warehouse at some point, and have promised to turn it into a poultry farm. Bloody hypocrites! Confused lot.” He wrote.

However, Meek Mill has apologized to Ghanaians over the video via a Tweet. The rapper accepted blame and additionally seek forgiveness for crossing boundaries.

According to Meek Mill, the video was taken out of context because he meant no harm or disrespect to the office of the president and Ghanaians at large.

My apologies to the people if any disrespect! We still gonna push to make the connection between black people in America and Africa … what I’m trying to do is more than a video and you should see coming soon! My apologies to the the office also!

I’m just not here for no separation of anything black … we already separated enough and don’t understand each others cultures … let’s used this to help fix that and not more judgement towards each other!