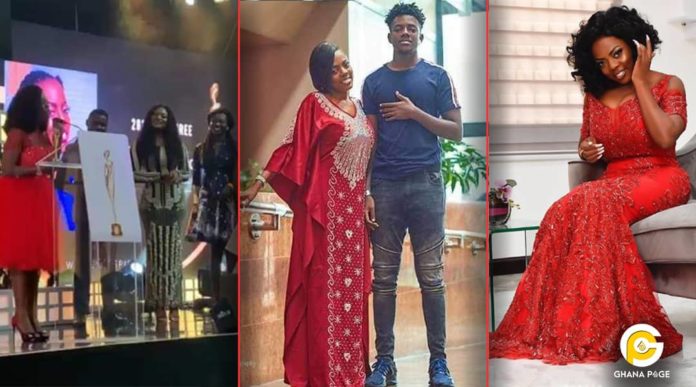 Popular Broadcast Journalist Nana Aba Anamoah has received the Excellence in Media honours at the Ghana Women of the Year Honours 2019.

While taking the award, she made an interesting revelation about her son, Jyoti Paa Kow Anamoah.

According to Nana Aba, her son pleaded with her before the event not to dedicate any of her awards to him because he did not want any of his friends to be calling him about his mum’s awards.

He also said that he does not want to be in the limelight like his mother so she should not mention him.

Despite the concern raised by her son, the award-winning broadcaster went ahead to dedicate the award to Paa Kow, but asked his friends not to call or bother him.

She later posted a video of the event on her Instagram Page with the caption, “My intelligent son, J…ruler of my kingdom, love of my life… In my defence, @sandraankobiah managed to get this video but since you’ve blocked me on IG and refuse to accept friend requests from any of my friends, I’ll just pretend you don’t know about this. Peace”

The GH One TV Host, together with 8 other outstanding women in various fields received awards at the Ghana Women of the Year Honours 2019, held at the Labadi beach hotel in Accra on Friday, April 13 2019.