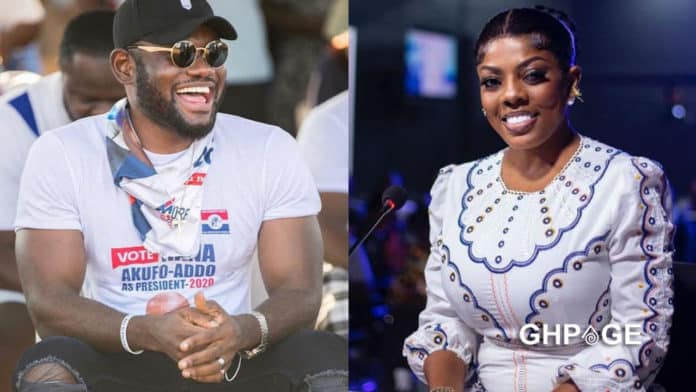 The actor was among scores of public figures who campaigned for the NPP during the 2016 and 2020 elections that has seen the Akufo-Addo-led government in power for 6 years.

But despite his allegiance to the party, it appears David Osei is entirely not in support of every action the government takes, including the recent pledge towards the Cathedral.

The move compelled the actor to take to Twitter to lash out at the NPP over what he described as their “misplaced priorities, greed and insensitivity” towards Ghanaians who are moaning about the growing economic hardship in the country and have opposed the project.

He tweeted: “Misplaced priorities, self-glory, greed and insensitivity towards the plight of the citizenry. We can’t pay government workers, and staff, working tirelessly 24/7 yet we have 25,000,000 for a cathedral in this perilous time of our economy.”

Reacting to the tweet, Nana Aba lauded the actor for his expressing his “honesty” opinion on the issue even though he is a staunch member of the party.

“I have so much respect for such level of honesty. The fact that he campaigned publicly for this administration doesn’t mean he agrees with insensitive decisions.

Integrity is a principle that never fails. Cheers, Prince David.”

The National Cathedral project was proposed by the government in March 2017 as a physical embodiment of national unity, harmony, and spirituality.

The $350 million multi-religious cathedral will have an auditorium with room for 5,000 people, chapels, and a baptistery.

However, the project has been opposed by a majority of Ghanaians who believe there are more important infrastructural projects to be undertaken to give value to them.

In a letter addressed to the Controller and Accountant General Department, the Finance Minister, Ken Ofori-Atta, ordered the release of GH¢25 million as seed money for the construction of the National Cathedral.

This move has sparked an uproar on social media with many criticising the government’s actions that seem to neglect the plight of the people who elected them into office.