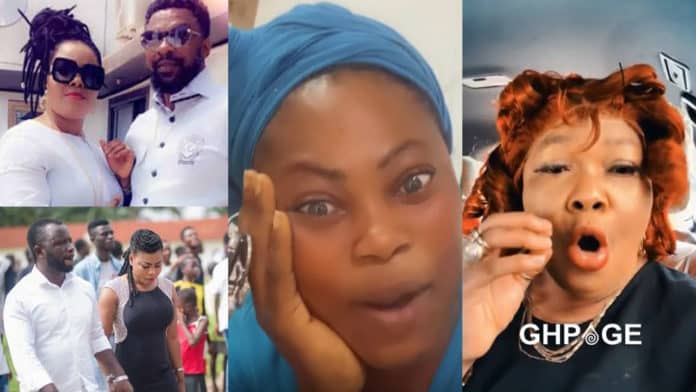 Self-acclaimed repented fetish priestess Nana Agradaa has clapped back at gospel singer Joyce Blessing after she ridiculed her over her marriage which has reportedly suffered a hit.

In December last year, Nana Agradaa made a mockery of Joyce Blessing after a secret DNA test done by her husband revealed that one of their children is not biologically his.

She bluntly condemned Joyce on live TV for having an affair, describing it as an abomination for one claiming to be a servant of God to be caught in such a scandal.

On the back of this, Joyce Blessing has also shared a video having a good laugh at Nana Agradaa after bringing her fresh marriage woes to social media.

However, Nana Agradaa who is currently having a dose of the bitter drugs she gave to Joyce Blessing is not pleased with the latter’s reaction.

Although the former fetish priestess took her problems to social media, she says she does not expect someone like Joyce Blessing who no longer has any dignity as a woman to have a say.

She labelled Joyce as a prostitute and a promiscuous woman who could not keep a home but embarrassed herself by sleeping with another man and getting pregnant for him.

Watch how Nana Agradaa took a swipe at Joyce Blessing

For the past two weeks, Nana Agradaa has been beefing her own husband on the grounds that their spiritual father almost collapsed their marriage.

In one of her IG live videos, Nana Agradaa disclosed that she has bought a church building belonging to the late Apraku My Daughter for 9 billion for her husband to operate as an independent man of God.

She however lamented about how the investment has seemingly gone to waste as her husband is still working with their spiritual father, Sofo Kyere.

In another video also, Nana Agradaa threatened to chase her husband with a cutlass if he ever changes his mind to come back to work with her after she has made it big in the gospel ministry.