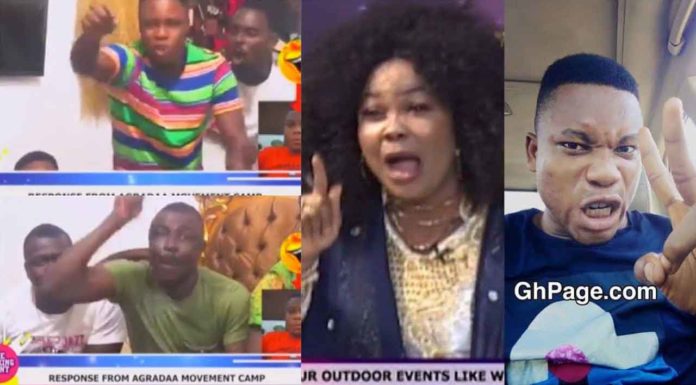 The fetish priestess and her bodyguards rained insults on Nana Hoahi and dared him to step his foot in Sowutuom (Nana Agradaa resident).

They also threatened to attack him physically and spiritually for speaking against Nana Agradaa and accusing her falsely.

Nana Agradaa also added that he will hold Nana Hoahi responsible for anything that happens to her or workers.

This comes after Nana Hoahi accused Nana Agradaa of sleeping with policemen at Sowutwom.

He also alleged that Nana Agradaa got pregnant for another man while married to her husband.

According to Nana Hoahi, the fetish priestess sleeps with the policemen to avoid being arrested and she has duped several people.

He also threatened to storm Nana Agradaa’s television station at Sowutwom in the Greater Accra Region to destroy her properties.