Watch: Nana Ama McBrown Seems to be mocking Counselor Lutterodt in this video 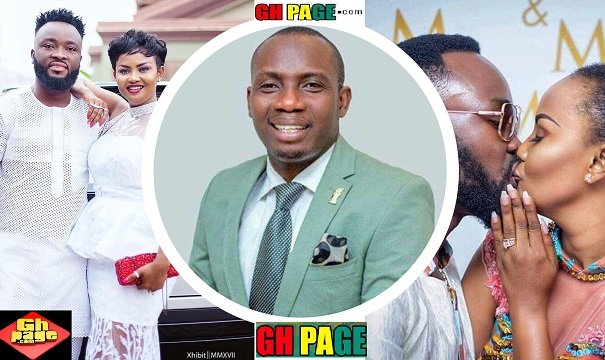 A few days ago and as reported by Ghpage.com, the controversial counselor made some outrageous claims that Kumawood actress Nana Ama Mcbrown’s marriage will not last long and might soon collapse.

According to the counselor, the Kumawood actress married someone way below her age and Maxwell at such a young age cannot control a woman of such a caliber especially when it is “Nana Ama McBrown”.

However, in a recent video posted on the actress’ Facebook page, Nana Ama could be seen singing the popular hit song by Akatakyie, Odo Esisi mi, in sort of a reply to the counselor whiles her husband drives.

She captioned the video,;

“This is how we do #GodIsIn #NyameWoMu #HappySunday #ShoutOut #Akatakyie #Brimm’, which suggests that God is part of her marriage.”

Watch the Video below

Counselor in that recent interview stressed on the hypocrisy he sees in Nana Ama’s marriage and stated that he can clearly see Maxwell is not in control over the marriage as it should be.

“You can’t live a hypocrite life like that.When a man marries you, he must be able to take control, for the woman to feel, she is the wife.Not when the man cannot be who he is, because he is a child.”He stated.

“When you marry a child, you make him suffer. That boy is too young for that woman(Nana Ama McBrown).That guy has a good future but not with Nana Ama Mcbrown.Nana Ama Mcbrown needs somebody whose age is ahead so she could live better.” He added.

And about their age, Ghpage.com can state that Nana Ama Mcbrown turned 44 years this month whereas Maxwell, her husband is in his early 30’s.