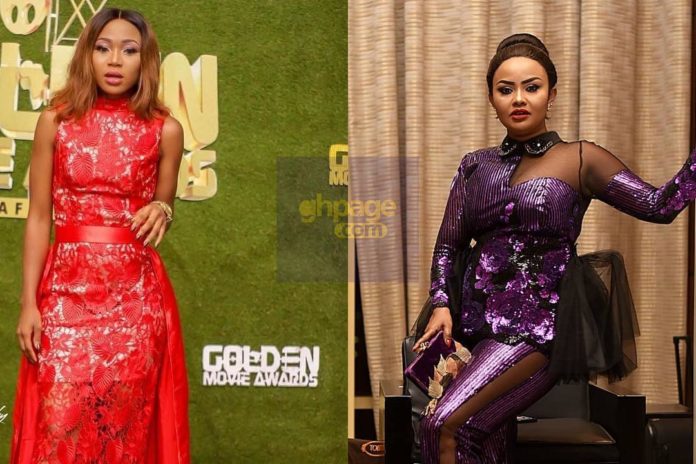 The 2018 Golden Movie Awards Africa came off on Saturday, June 2, at the Movenpick Ambassador Hotel in Accra.

As usual, celebrities never let the opportunity go without displaying so much drama. The historic night also pulled off with some celebrities stealing the spotlight. One of the actresses who put out a drama at this year was Rosemond Brown with her ‘all over the place’ act.

Also Read: Golden Movie Awards 2018: What Your Favourite Celebrities Wore To The Event

But the night would not go without Nana Ama McBrown also displaying her comic skills as usual. Whiles on stage to pick up the award for ‘Side Chic Gang’, Nana Ama McBrown used the stage to ‘mock’ Rosemond Brown for her bad English.

She ‘jokingly’ said that her English was going to be simple and precise unlike Rosemond Brown affectionately called Akuapem Polo who has been criticized over her ‘bad grammar’.

“Anyway I have to manage and speak some English but I promise I won’t make it like a long grain English like him or her because you know how Akuapem Polo speak, she speaks and brings past tense to present and call a man she; calls a woman as he,” she teased.

Rosemond Brown had struggled to mention the word “indigenous” when she was asked to present an award. The struggle caused the whole auditorium to burst into laughter.

She was, however, able to pull through to the end and as usual, didn’t fail to remind the audience that she’s aware of her bad grammar.

Rosemond Brown during the red carpet session od the event also knelt to apologize to Moesha Buduong for criticizing her after she said in an interview with CNN that Ghanaian women have to sleep with married men in order to be able to cater for themselves.

SEE MORE: Nana Ama McBrown Joins Campaign Against The Use Of Tramadol

Kumawood actress and movie producer Tracey Boakye has opened up about some of the things she has been able to achieve at...
Read more