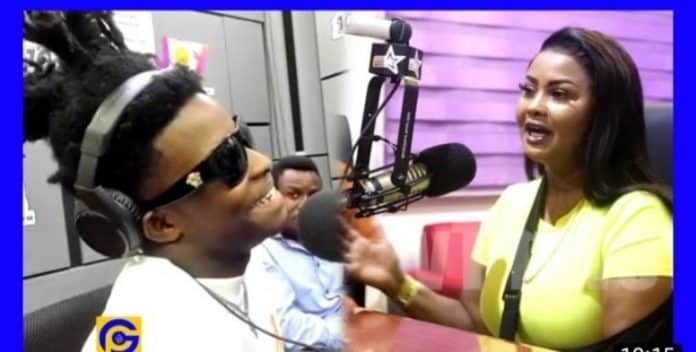 Just about a few days ago, Lasmid, a rising star in Ghanaian music, made a great deal out of himself by declaring that he is the country’s top performer right now.

This claim was made by the singer of “Friday Night” during an interview on Accra FM with Nana Romeo.

He made it clear in his response that he would concur with the many claims that he is now Ghana’s most promising musician.

Lasmid’s confidence landed him into deep trouble as a long of Ghanaians slammed him for being arrogant.

Some even threatened to boycott his songs if he fails to retract and apologize to Sarkodie, Shatta Wale and Stonebwoy.

Even Kwaw Kesse joined the drive to chide and bastardize Lasmid for telling the simple truth.

Veteran actress, Nana Ama Mcbrown who has been closely monitoring the whole issue since it became a national conversation on the internet has dropped a piece of deep advice for the budding rapper during an interview on HITZ FM with Andy Dosty.

As suggested by Nana Ama Mcbrown, Lasmid should reject some accolades from presenters and fans because it might not allow him to reach his full potential and create ruthless enemies for him

The rapper in turn thanked the iconic screen goddess for supporting him since the inception of his career.

I’m yet to understand why some people were calling for Lasmid’s head over his harmless comments. He only aired his opinion and said nothing derogatory or disrespectful.