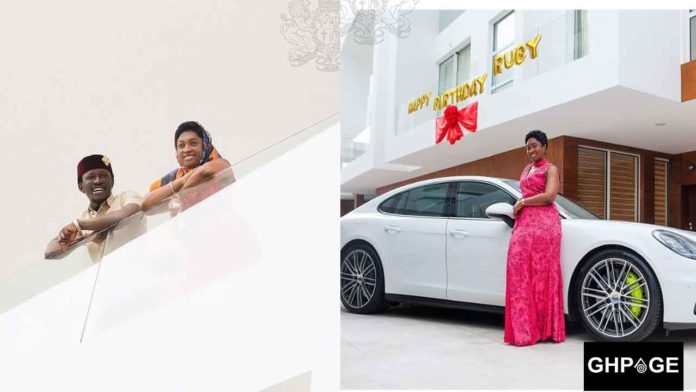 Ghanaian business mogul and founder of Wonda World Estates, Nana Kwame Bediako has expressed deep affection to his lovely wife as she celebrates her birthday.

Nana Kwame Bediako popularly known as Cheddar celebrated his wife’s birthday by gifting her a huge mansion and a car.

In a video the millionaire shared on his Instagram page, Cheddar’s wife known as Ruby was beaming with smiles as her children ushered her into the house.

He offered these luxurious gifts to his beautiful wife as a birthday and mother’s day present.

ALSO READ: Ghanaian millionaire Nana Kwame Bediako narrated how he made his first One million pounds at 21

He recently revealed in an interview how he made his first one million pounds at age 21 by selling steel, scrap and telecommunication materials.

This beautiful video has got social media users talking and also sending well wishes to Nana Kwame Bediako and his beautiful wife.

Read the comments below;

royalsika commented; “This is just wow”.

abigailgreatlove841 had this to say; “God bless u. This is so beautiful“.

trendynina added; “This is so beautiful, more blessings”