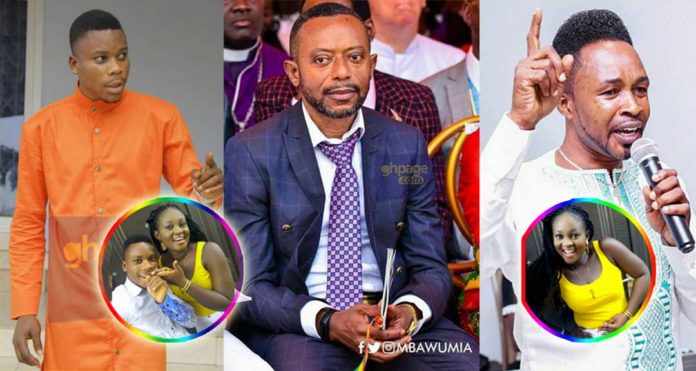 Nana Osei Bonsu popularly known as Nana Hoahi, the palm wine tapper of Otumfuo Nana Osei Tutu II has narrated how the founder of Glorious Word Ministry destroyed his impending wedding with a false prophecy simply because he attends the church of his “Enemy”.

According to Nana Osei Bonsu, who is now a Gospel musician, he was set to marry a lady from the church of Revered Owusu Bempah and he consulted his friend, Nicholas Omane Acheampong who is now very close to Owusu Bempah.

Nicholas Omane Acheampong aka Zaphenath-Paneah told him, he should pray Owusu Bempah never finds out that he (Nana Osei Bonsu) attends the church of Prophet Badu Kobi or self he will give out a false prophecy to destroy the marriage because he hates him (Badu Kobi).

After the woman he was set to marry introduced him to Owusu Bempah, he accepted him wholehearted and gave the go-ahead for them to prepare for the wedding.

They even set date for the wedding. By then Owusu Bempah didn’t know he is the church member of Badu Kobi, founder of Glorious Wave Church International.

Owusu Bempah, Nicholas Omane Acheampong, and Great Ampong called the bride to be and told her that God has revealed to him (Owusu Bempah) that she will be sacrificed by the gods of Nana Osei Bonsu’s family within 6 months after the marriage and it’s the norm in the family

Fearing for her life, the woman Nana Osei Bonsu Hoahi was set to marry has called off the wedding and Owusu Bempah encouraged her to do so

Listening to the Otumfuo’s palm wine tapper, it was obvious he is accusing Reverend Owusu Bempah of giving a false prophecy just to stop the wedding because his “Enemy” Prophet Badu Kobi’s church is where he (Nana Osei Bonsu) attends.

He was also accusing Nicholas Omane Acheampong of conniving with Owusu Bempah to disgrace him just to stop paying him back his money.

LISTEN TO NANA OSEI BONSU HOAHI NARRATES HIS STORY BELOW