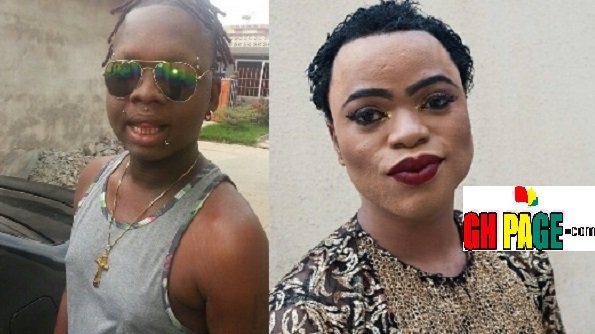 Ghana’s own Nana Tornado, known to have numerous ‘facial piercings’ has shared a video of himself with controversial Nigerian cross-dresser, Okuneye Idris Olarenwaju known in the entertainment industry as Bobrisky.

Nana Tornado, known in real life as Emil Gerald Wood — who is best remembered for his role in Delay’s TV series ‘Afia Schwarzenegger’ was captured in the video driving in town with Bobrisky and stopping to get some pizza at a restaurant.

READ ALSO: “You didn’t make one major hit this year”, Davido hits back at Mr. Eazi

Tornado looked very happy in the video and was making inquiries as to when the pizza will be ready. On the other hand, the controversial Nigerian, Bobrisky who was silent in the video was seen admiring and advertising his beauty.

Bobrisky, who is known to be involved in a lot of controversies was the most searched individual from October 26 to November 2016 according to Taiwo Kola-Ogunlade, Google’s Communications and Public Affairs Manager, Anglophone West Africa.

He became recognized by being highly controversial on social media. He was able to gather traffic to his Snapchat account when he claimed he had a lover who is assumed to be of masculine gender despite the Nigerian constitution at that point in time which made such same-sex relationships an offence punishable by serving 14 years in a penitentiary.

Check out the video below:

Share
Facebook
Twitter
WhatsApp
Previous articleShatta Wale’s emotional letter to Terry Bonchaka on the 14th anniversary of his death will make you weep
Next articlePhotos:Late Major Mahama’s wife celebrate his birthday by cooking his favorite breakfast