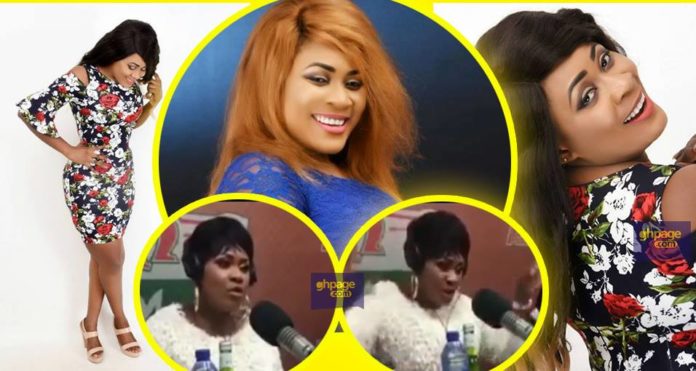 Kumawood actress Gladys Mensah Boaku but known as Nayas 1 by most movie lovers was trending earlier this year with her Ernest Opoku drama which got most Ghanaians supporting her but later turned out it was a false allegation.

Recently she shared photos of herself and Kumawood actor Apostle John with a caption that sort to suggest that she just got married to the actor which also turned out to be false but she only acted as his wife in an upcoming movie.

Well, she is back again and this time around she claims to have four (4) tattoos and 11 piercings on her body and she revealed this in an interview with Zionfelix.

According to her, she loves tattoos and piercings that was why she went in to have some done on her body.

“I’ve got a lot of tattoos, I’ve about four tattoos and eleven piercings but upon all that, I love God. God doesn’t judge based on personality but from the heart. “I’m someone who worships God a lot, let’s take the late Ebony for an example, she worshipped God a lot, so, if you judged her based on her tattoos, you got it wrong.”

SEE MORE: Don’t propose to me if you are less than 40 years – Nayas