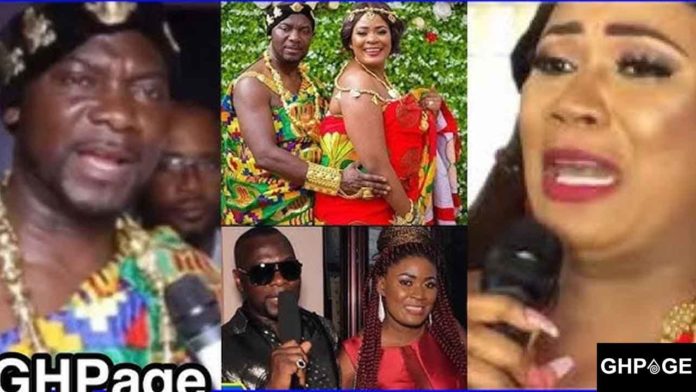 The husband of Ghanaian actress Nayas known as Nana Sarfo Kantanka has finally reacted to reports about his failed marriage.

In an audio chanced upon by GhPage, the Kontihene of Ghanaians in Hamburg, Germany confirmed that his marriage to the actress has been in shambles for some time now.

Nana Sarfo then rendered an unqualified apology to his wife and her family for the unfair treatment he meted out to her.

He explained that it was never his intention to tarnish his wife’s image but unfortunately, the situation was out of his control.

According to him, their families are working behind the scenes to resolve the issue and he is hopeful that their marriage will work again.

Nana Sarfo then pleaded with his wife to return home and also forgive him for his actions.

This comes after the actress revealed to the public that her marriage has hit the rocks and her husband maltreats her.

Nayas disclosed that her husband paid some vloggers to rain insults and tarnish her image after their marriage issues started.

She further indicated that she decided to marry Nana Sarfo after he promised to give her 500 euros monthly but he failed to fulfil that promise.

It was also reported that Nayas has been kicked out of her matrimonial home and was living in a refugee camp in Germany.