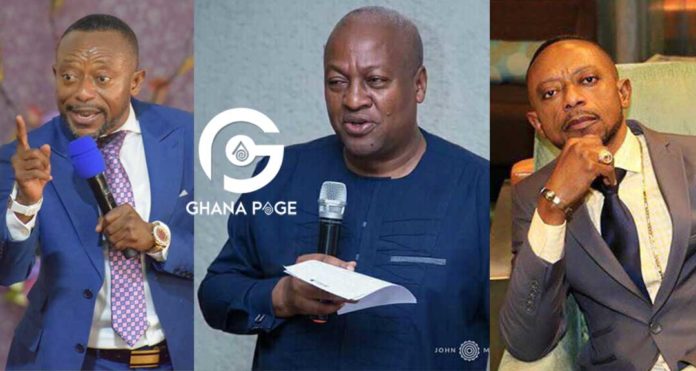 Reverend Owusu Bempah, the founder and leader of Glorious Word Ministry has alleged that the irate youth who attacked his church a couple of days ago are not really Muslims as they want Ghanaians to believe but rather hired thugs of the opposition NDC.

Speaking on Ekosii Sen on Asempa FM today, Friday 4th January 2019, Owusu Bempah revealed that NDC sent someone from Salaga to assassinate him but the person failed in his attempt.

They, therefore, mobilized these NDC members to attack him and disguise themselves as Muslims but he knows those who attacked his church and they were not Muslims but NDC thugs.

SEE ALSO: Leader of Zongo youth who attacked Owusu Bempah’s church reports himself to the Police

“NDC sent someone from Salaga to assassinate me so I knew those who came to my church even though they were speaking Hausa were not Muslims”, Owusu Bempah told the host.

Rev. Owusu Bempah warned the NDC and the pastors conniving to kill him not to bother because he is protected by God.

SEE ALSO: It’s only God who can avert the prophecies I made – Owusu Bempah breaks silence

“Chief Imam shocked me; he didn’t behave like some men of God who condemned me for doing God’s work”, he said.

On 31st December 2019, Owusu Bempah gave a number of doom prophesies about high ranking members in society. Owusu Bempah prophesied the death of ex-president Kuffuor and his wife.

He also prophesied that ex-president John Mahama as well as the National Chief Imam, Dr. Sheikh Osmanu Nuhu Sharabutu might die in 2019.

Angered by the prophecy about their spiritual leader, some irate Muslim youth stormed Owusu Bempah’s church and destroyed everything the could see. The angry youth also streamed their assault live on Facebook.