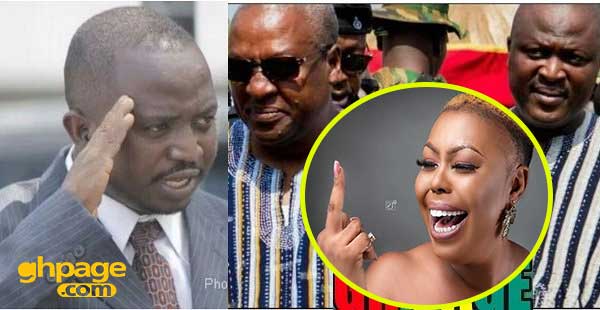 Radio and television presenter Valentina Nana Agyeiwaa, popularly known as Afia Schwarzenegger, has criticized Stephen Atubiga for his attempt to stand as a flagbearer for the biggest opposition party in Ghana, National Democratic Congress, NDC.

Flagbearer hopeful, Stephen Atubiga had said that if he becomes the flagbearer, he doesn’t mind making the former President John Mahama his running mate if structures of the National Democratic Congress (NDC) will permit him.

“If I had the opportunity if the constitution allowed and the party structures allowed me, I would not mind making his Excellency John Dramani Mahama my running mate,” Atubiga said on Citi’s Eyewitness News.

However, his utterances have not sat well with Afia Schwarzenegger, who believes it is only in Ghana Mr. Atubiga who wears a stinking coat will even think of becoming a president.

The controversial TV show host who made that statement on her Political Police show on TV Africa wondered why NDC will allow fools like Stephen Atubiga to meddle in their flagbearership race.

“Which audacity does Stephen Atubiga has to say that if he becomes the candidate, he will not mind picking Mahama as his running mate?” She questioned.

She asked how many shirts and coats Stephen Atubiga has. She even mocked the way Atubiga dresses and to think of becoming a president.

Atubiga in his interview on Citi’s eyewitness news also stated that he will make Prof. Alabi and Sylvester Mensah his special advisor and Foreign Affairs Minister respectively if he becomes President.

“If you look at the party, I am the best choice right now. I have made NDC so attractive.”