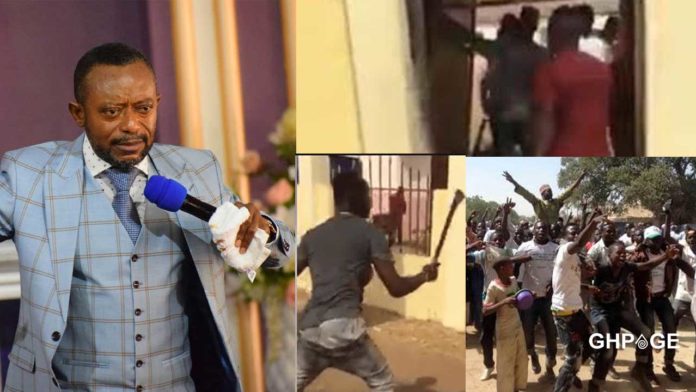 A member of the opposition the National Democratic Congress(NDC) identified as Dr. Lawrence Appiah who is also the founder of a group calling itself the Diaspora Progressive Movement based in the USA has asked that Ghanaian youth teach Rev. Owusu Bempah a lesson.

Rev. Owusu Bempah during his 31st Night service prophecied that anyone that accepts to be former President Mahama’s running mate should brace him/herself up because he says death hovering around him/her and would die shortly after the 2020 elections.

But the Diaspora Progressive founder in an article called on the youth of Ghana to beat Owusu Bempah so he stops the nonsense he calls prophecy.

On December 31, 2019, Rev. Owusu Bempah prophesied that whoever is nominated as the running mate to HE John Mahama will die after the 2020 elections. I mean, which God will speak like that? What was the motive behind Rev Owusu Bempah saying that? What does he hope to achieve my instilling fear and panic into the NDC fraternity? Is he saying that so Nana Addo can win the elections because NDC went into the elections without a running mate?

It is five days into the New Year but both the peace council and the Christian council have not come out to condemn this guy who continues to ridicule name of their God. Just imagine what Rev Owusu Bempah would have said about the Imams on Dec. 31, had the moslem youth not stopped him?

I think the time has come for Ghana to stop Rev. Owusu Bempah from prophesying once and for all. The principle of Boot for Boot should first be tested on Rev. Owusu Bempah. The youth should beat him to teach him a lesson that he cannot use the name of God to bring Ghana down. Ghana is for all of us and we need a peaceful handing-over on January 7, 2021”

Rev. Owusu Bempah on the night dropped several prophecies including predicting a win for the ruling party the NPP led by Nana Akuffo Addo but Ghanaians have reacted to the prophecies in different ways.