NDC offered me $1 million but I rejected – Owusu Bempah 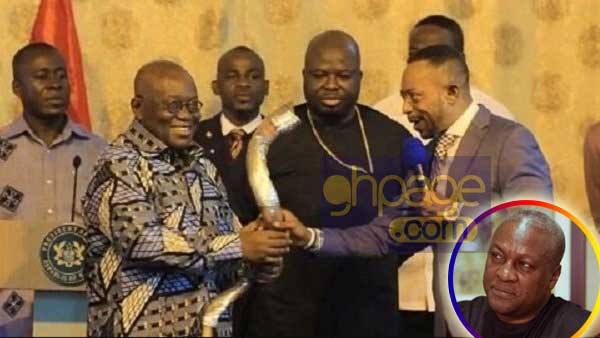 The founder and leader of Glorious Word Power Ministry, Rev. Owusu Bempah has revealed that the opposition NDC when it was in power before the General elections in 2016 offered him 1 million dollars and a V8 to be on their side but he rejected because his spirituality cannot be bought.

Owusu Bempha is a strong advocate for the ruling NPP and he has never shielded his love and support for the ruling party and its leader, Nana Addo Dankwah Akufo Addo.

SEE ALSO: I will beat Anas like my son – Owusu Bempah

But Rev. Owusu Bempah in an interview with Okay FM has revealed NDC tried to buy him prior to the 2016 general election with an amount of 1 million dollars and a V8 but he rejected the offer.

“Even the NDC offered to give me a V8. They wanted spiritual guidance but I rejected the offer although I also prayed for them,” Owusu Bempah revealed in an interview with Okay FM in Accra.

Owusu Bempah has in recent times come under attack from the Christian Council of Ghana for his continues doom prophecies.

SEE ALSO: I will expose those who killed Amissah Arthur after his burial – Owusu Bempah

According to the Christian council, they expect him to pray against any doom prophecy and not take credit and rejoice when such prophecies come to pass.

He has continuously taken credit for prophesying some of the worse fate ever happen in recent times, From the death of Ebony Reigns to the death of late Vice president Amissah Arthur.

In an interview with Starr FM, the Chairman for Christian Council of Ghana, Rt. Rev. Senyo Agidi said of Owusu Bempah

“Bishop Owusu Bempah is one person people do not agree with even in the society. He is able to prophesy deaths but does not pray to cancel them. Pastors are expected to help people and not to create fear.”

SEE ALSO: Popular Man Of God Names The Top 3 Occultic Prophets In Ghana Who Are Leading People To Hell