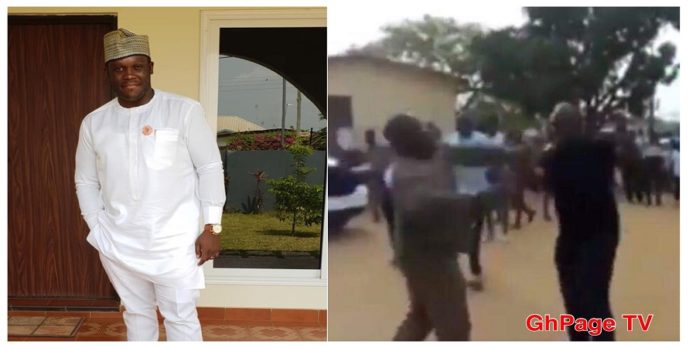 Reports reaching Ghanapage.com indicates that the Member of Parliament for Prampram representing the National Democratic Congress (NDC), Sam Dzata George has been assaulted by macho men at the ongoing by-election at Ayawaso West Wuogon Constituency.

According to the Member of Parliament, he was assaulted by the NPP’s Invincible forces who were dressed like members from the National Security.

The assault which was captured on video, saw the Member of Parliament being attacked by gunmen at the ongoing by-election.

According to an eye witness, these armed men were in black shirts and khaki shorts and fired gunshots which lasted for twenty minutes after they stormed the La Bawalashie Presby polling station.

According to witness, some members believed to be NDC supporters were injured following the gunshots at the polling centre.

The police are currently at the scene managing the situation but these armed men claim to be from the National Security.

Lydia Seyram Alhassan is the spouse of the late Mp, Emmanuel Kyeremanteng Agyarko contesting the seat for the New Patriotic Party (NPP).

Also, contesting the seat for the National Democratic Congress (NDC) is Delali Kwasi Brempong and hopes to win the seat that has been captured by the NPP since 2000.

However, following the recent assault of the Member of Parliament and the shooting, the NDC has withdrawn from the ongoing by-election at Ayawaso West.