Of herself and her manager Cassiuos 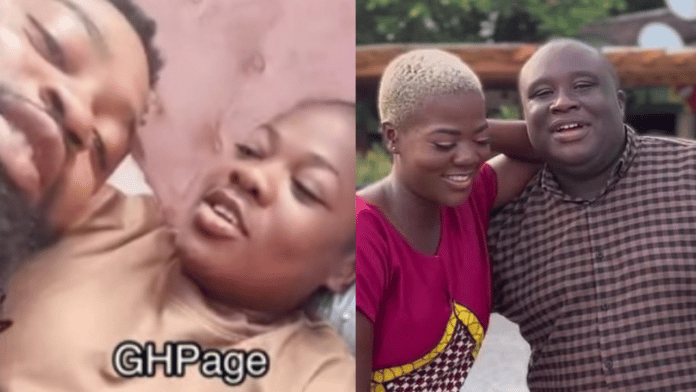 TikTok star, Asantewaa has landed on the trends table once again after sharing a lovey-dovey video of herself and her manager Cassious.

Recall that a few months ago, it was rumoured that Asantewaa and her manager Cassious were having an amorous affair after a video of them smooching and kissing popped up on social media.

Both Asantewaa and her manager came out to rubbish the rumours and categorically stated that there’s nothing romantic going on between them.

Just yesterday, Asantewaa shared another video of herself and her manager in the bedroom behaving like lovers.

While Asantewaa was addressing her fans about the rumours that her husband has divorced her, her manager came from a room to rest his head on her chest in a very romantic and seductive manner.

Her manager also revealed that married Asantewaa went to the club to party like there’s no tomorrow and got heavily drunk in the process.

In this same video, Asantewaa disclosed that her husband is out of the country and they haven’t divorced as speculated.

This inappropriate behaviour of married Asantewaa and her manager has given ressurected the conversation about the never ending rumours that they are dating.

Some social media users have expressed their intense disgust over how Asantewaa and her manager cassually cuddles and behave like married couples.

Meanwhile the TikTok star has a husband who hate drama hence stays away from the internet.

Some netizens have advised Asantewaa’s husband, Mr Jeffery to divorce her before things get out of hands becaue the writings are already on the wall that she’s more interested in her manager than him.

Below are some of the comments gathererd under the video;

Nana Antwi Boasiako – Even no man will allow his girlfriend to do that and talk about marriage woman. Her husband not serious

Dwayne Sean Deuces – You sure sey her husband is perfectly normal

Richmond Abelisoh Amoah – How one earth could someone even manage my wife ? It’s not possible!! The person will end up chopping her

Asante Christian – Men are really suffering ,hmmmm. May we not marry this type of women