Netizens slam Jackie Appiah for splashing $12,200 on a bracelet 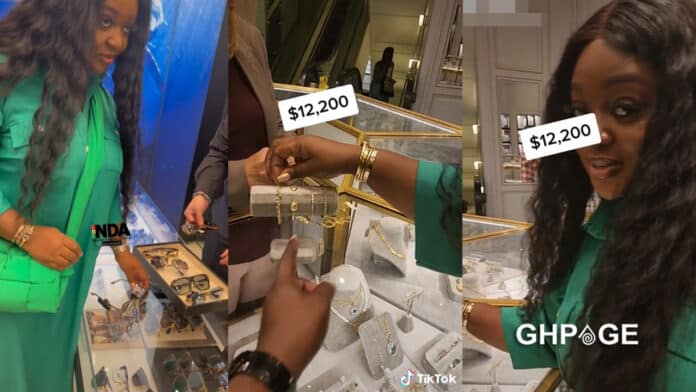 Actress and real estate mogul Jackie Appiah has come under severe criticism for splashing a whopping $12,000 on a single bracelet during a shopping spree in New York.

Jackie Appiah is evidently a ‘bigger baller’ whose ability to splash money on a shopping spree is unmatched – as far as her female counterparts are concerned.

READ ALSO: Jackie Appiah shops for gold bracelets worth $12,200 each in New York

The Ghanaian actress has yet again given us more reason to believe she’s one of the richest among her colleagues in the showbiz industry, despite her unknown net worth.

In a video that has since gone viral on TikTok on other social media platforms, the multi-million dollar homeowner was shopping for luxury items including jewellery in the United State city of New York.

Ghanaians who have come across this video showing Jackie Appiah’s flamboyant lifestyle have advised her to invest in lucrative businesses now that she’s active and bagging several roles in movies.

Else, when she goes broke like some known actors and actresses in her old age, she will regret her hasty decisions to spend huge sums of money on ‘useless’ things when she was on top of her game.

Commenting under the video with several threads of advice to Jackie Appiah;

Priscilla Essien wrote – Whiles Waakyie felt sick and no one in the movie industry took it his or herself to help? God is still watching all of us on how we uses our wealth when he bless us.

James Akorli wrote – Eeeeeii asem ooo. Which type of Ghana kraaaaa do some other Ghanaians live in? How do they make these cash whiles some of us keep hustling but nothing dey come? Hmmmmm!

Enoch Frimpong wrote – Indeed she worked for and she has right to enjoy but sometimes lets consider our dear brothers and sisters in the hospital struggling to survive. A colleague of hers just died bcz money known as Awaakye. Moreover we have classmates that are battling with life,we can stretch our hands to them and no one can take that glory from you.God bless you for others to be free.

Van Modric wrote – When she dies ,,,she should go with it ,,,,we even tired of them,,, pressure to youths saaaa ,,, gyimeee Asem saaaa

Ishmeal Adjani wrote – After all these spendings they will start to beg for money in their old age. Stupidity to the highest level

Kassim Idrisu wrote – That money if you give it to me to buy a house what will happen?