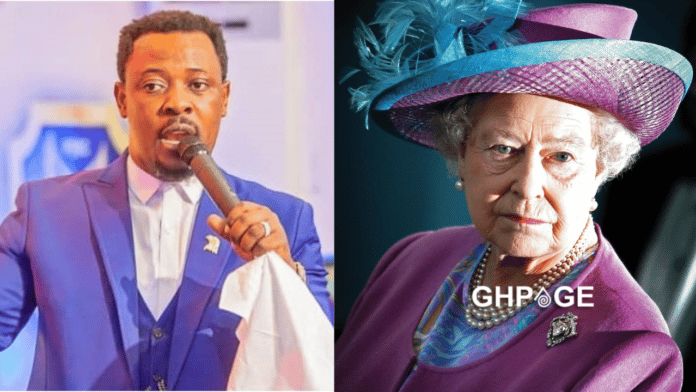 Prophet Nigel Gaisie has tapped into the viral news of Queen Elizabeth II’s death following a 2021 December 31st prophecy of his that has re-entered the trends list just after the Queen was officially declared dead.

On 31st December 2021, Prophet Nigel Gaisie urged the world to pray for Buckingham Palace because he foresees the death of the Queen.

According to Prophet Nigel Gaisie on that night, he witnessed Queen Elizabeth’s demise in the spiritual realm. He continued by saying that the death of the queen had caused tears and sobbing among English citizens.

The founder and leader of Prophetic Hill Chapel has taken to the internet to blow his own trumpet following the materialization of his “doom prophecy.”

Reacting to the news of the Queen’s death and the fulfilment of his prophecy, Nigel Gaisie wrote on his Facebook page;

Prophecy Number 21 Or 24’…December31st,2021’Prophcies’……’I was inspired to say thus the queen of England will die and it just came to pass…..It’s not all of us that are JOKING…..PROPHECIES ARE REAL….

Her family gathered at her Scottish estate after concerns grew about her health earlier on Thursday.

The Queen came to the throne in 1952 and witnessed enormous social change.

With her death, her eldest son Charles, the former Prince of Wales, will lead the country in mourning as the new King and head of state for 14 Commonwealth realms.