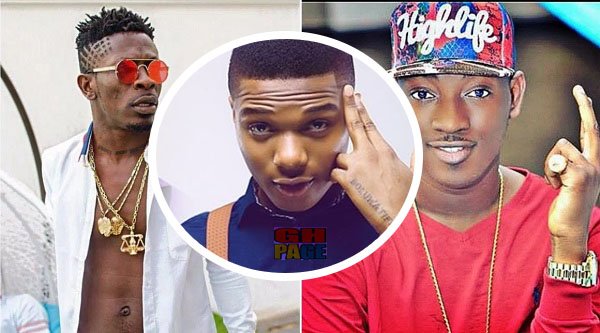 For now, only one Nigerian musician has been spotted to be in support of Shatta Wale amidst insult from Nigeria is their own artiste Dammy Krane.

Social media especially on Twitter as we reported turned, a war zone between Ghanaians and Nigerians after Shatta Wale opened his to diss their national treasure, Wizkid.

Shatta Wale in an interview with Kasapa fm said he doesn’t see Wizkid as a superstar and there, the war began.

Nigerians have descended on Wale with insults and he’s not the only one getting the disses, they’ve added the whole Ghana and even our President to the list.[Read the diss here].

Now, amidst all these, it is unlikely to see a Nigerian rejecting their own against a foreigner even if he/she is the biggest enemy.But the unthinkable has happened—Nigerian singer, Dammy Krane came to support the ‘Dancehall King’ in a Twitter update directed at him.

He said “I stand by you my g @shattawalegh Real things we deal with …. No Fake Hype!!!”

This comes as a surprise as Samini, Shatta’s own countryman rather threw his support behind Wizkid and a series of tweets mocking Shatta Wale.