Nkansah Lilwin and Countryman Songo spoil the stage in London 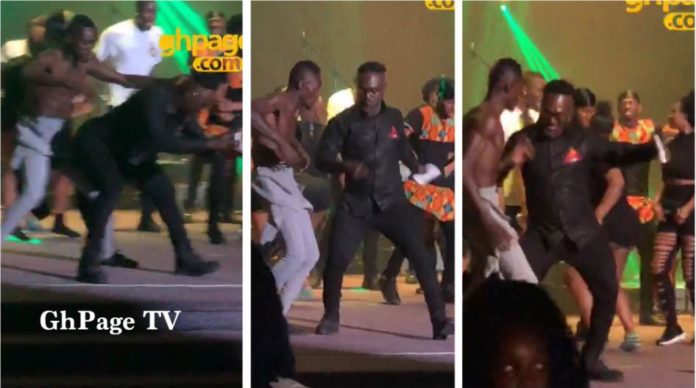 As usual, the legendary show featured a host of popular Ghanaian artists as witnessed by Ghpage.com manager, Toni Kusi, the show was dhope and massive as well.

Read Also: I’m proud to be a Ghanaian – Mario Balotelli

Popular artists who headlined the show to make it remarkable are the main man, Abrantie Amakye Dede, Kwadwo Nkansah Lilwin, and the rockstar Kuami Eugene.

The Kumawood actor was the initiative artist at the show as he pulled the crowd to sideways by his energetic and interesting performance.

However, a minute to the end of Lilwin’s performance, popular TV sports presenter, Countryman Songo joined the comedian-actor on stage and it was interesting from that moment.

The two stage-warmers pulled a massive attention on stage as they showed off their dancing prowess to the enjoyment of the audience.

Countryman Songo gave his rock-backside to Lilwin and he was all over it with the crowd cheering their dancing style.

The legendary show which was organized by Salt media was hosted by popular Ghanaian sports anchor, Countryman Songo.

Well, the organizer, Mr. Bobby happens to be the son of the highlife legend Amakye Dede and really polished the show.