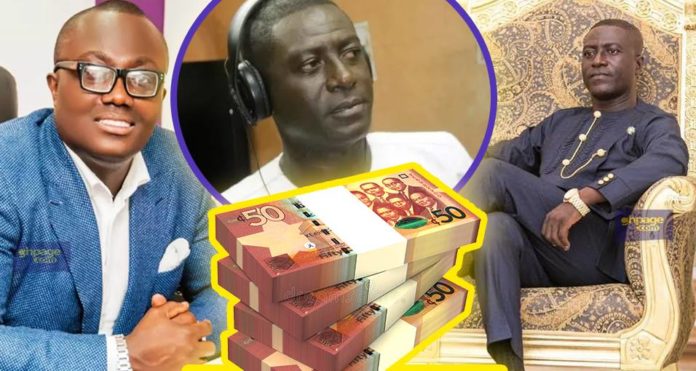 Adom FM’s morning show presenter, Godsbrain Smart, aka Captain Smart, has stated that he did not dupe Bola Ray for a sum of 100,000 Ghana cedis.

The news of the presenter reported having duped the CEO of EIB network, Bola Ray arose when EIB network, owners of Starr Fm, Kasapa, Live Fm and co emerged — Bola Ray was on a quest to conquer the Ghanaian media world with his EIB Networks.

According to the reports, Bola Ray and Kwabena Duffour’s EIB Networks had acquired about 8 radio stations from the last quarter of 2014.

And According to Peace FM’s entertainment review show, hosted by Akwasi Aboagye, Captain Smart who is a notorious womanizer, known for duping and dumping women with a marriage scam—scammed Bola Ray of GHC 100,000.

Meaning he agreed to the move to Kasapa, collected his money, but never showed up at the station to work when it was time to work. [Read more on that story here]

In a reaction in a Facebook live video, however, Captain Smart, the morning show host who was reported to have been interdicted stated that Bola Ray is in Ghana and he is also at multimedia — so why has he not been arrested if he duped him of the sum of GHC100,000.

“Sometime back I heard Captain Smart duped Bola Ray 1 billion(100,000 cedis). With all respect, Bola is in Ghana. He was with me in multimedia,I am still at multimedia. I am still the proud morning show host of Adom FM, why am I not arrested?” He quizzed.

The morning show host also dared the women abroad who claimed he had duped them to report the matter to the police if indeed, he has done such an act.