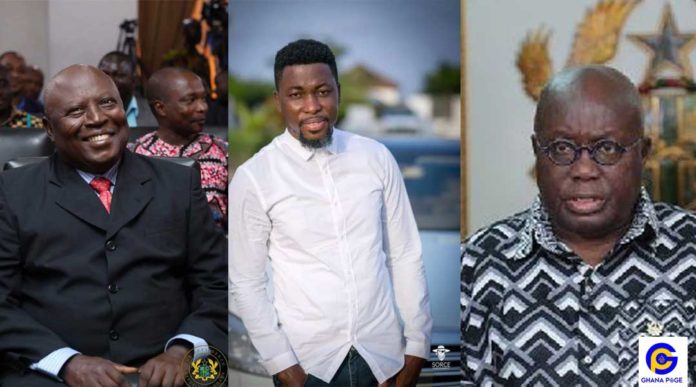 Ghanaian hiplife artiste and social commentator Kwame Asare Obeng popularly known as A-Plus has taken a swipe at Special Prosecutor Martin Amidu for achieving nothing since he was appointed.

According to the musician, Martin Amidu was able to persuade the NPP government to make him the Special Prosecutor to retrieve the state money given to Alfred Woyome but has proved otherwise.

The sympathizer of the New Patriotic Party (NPP) disclosed that Martin Amidu was given 180M cedis, V8, accommodation, uniformed bodyguards and a huge sum of money but hasn’t been able to find anything.

He also added that controversial member of Parliament for Assin Central, Kennedy Agyapong spoke against his appointment but he was criticized.

A-plus took to Facebook and had this to say; “Woyome is accused of fraudulently receiving 51 million Ghana cedis from government. Martin Amidu made all the noise that he could retrieve the money. From that his 2 bedroom house he petitioned the supreme court to allow him cross-examine Woyome to assist them collect the money.

The NPP government fell for Amidu’s bragging and made him the special prosecutor, gave him 180 million cedis, (more than three times what Woyome is accused of taking) gave him accommodation, a huge office, V8s, Saloon cars, fat salary, uniformed police officers as bodyguards, etc but he has not been able to even find the person who said tweaaa!!!

We will end up wasting money on him than corrupt officials have stolen since Kwame Nkrumah. Kennedy Agyapong spoke against this but they insulted him. And Nana Addo is still entertaining this man!!! Ah well…”

ALSO READ: Let’s vote against NPP and NDC in 2020 -A-Plus to Ghanaians 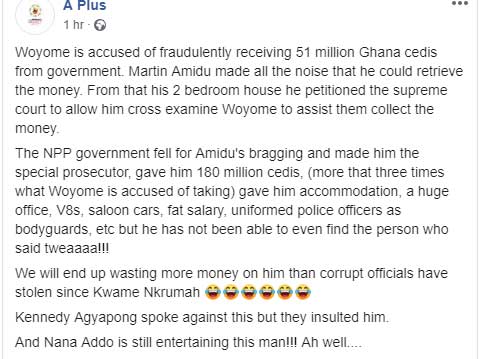 Kwame A-Plus who is popularly known for expressing his views without fear or favour recently jabbed the NPP government for their decision to put up a national Cathedral.

According to him, there are other pressing issues the government must address rather than building a National Cathedral.