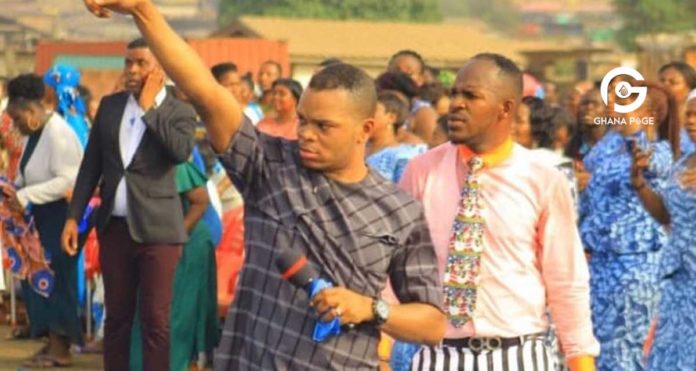 God himself descended at the International Godway Church founded by Bishop Daniel Obinim when the holy spirit was imparted into kids for them to minister to older people.

The last born of Bishop Daniel Obinim, 8 years old Angel Obinim took the mic from her father and begun to prophesy and deliver people from their ailment at the church on Sunday, 14th July 2019.

SEE ALSO: Obinim’s 12-year-old son takes over his church, prophesies to members like ‘God’ himself [Watch]

Angel Obinim first called a lady out of the hundreds of people gathered and shockingly identify her with her name which she responded as being correct.

The eight-year-old girl went on to reveal how the lady was there because of husband and money. Confirming, the woman revealed she is 38 years old and has never been married.

She claimed she was advised to come to Obinim’s church for deliverance. She also revealed things are very difficult for her financially, confirming what Angel Obinim prophesied about her.

8-year-old Angel Obinim proceeded to pray and deliver the lady, Gloria from her predicaments to the glory of God.

The 12 years old elder son of Obinim, Gifted Obinim’s video went viral when he also took over his father’s church and prophesied to many people recently.