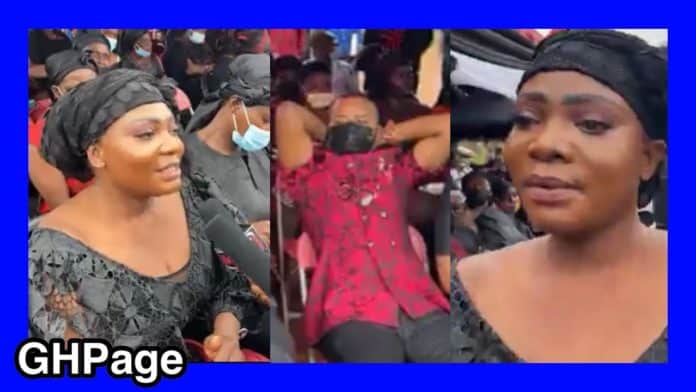 Florence Obinim, the wife of Bishop Daniel Obinim has disclosed that her husband paid for the full cost of the funeral of her late father-in-law which took place Saturday, August 28, 2021.

Speaking to the media at the funeral grounds of the late James Kwadwo Bonsu, she said although the family collaborated with Bishop Obinim to finalise arrangements for the funeral, no family member made any financial commitment.

“I have not seen anyone else contributing money for the funeral. My husband solely took care of everything with his own money. No family member’s monies were used, he sponsored everything but he worked together with the family. The only unique thing is that the money was only from Obinim,” she said.

The founder and head pastor of the International God’s Way Church, Bishop Daniel Obinim, could not contain his grief when he arrived at the funeral grounds to pay his last respect.

A heavyhearted Obinim broke down in tears after filing past his father’s body when he took a seat to observe the proceedings at the funeral grounds.

She further disclosed why she did not undertake any traditional rite in contravention with the usual traditional requirements by Akans where the wife of the bereaved husband is tasked to perform some rites for her in-law after his departure.

Mrs. Obinim explained that her husband requested that she refrained and she respected that decision.

The songstress also revealed that Bishop Obinim was the last son of his father and mother albeit he has other step-siblings.