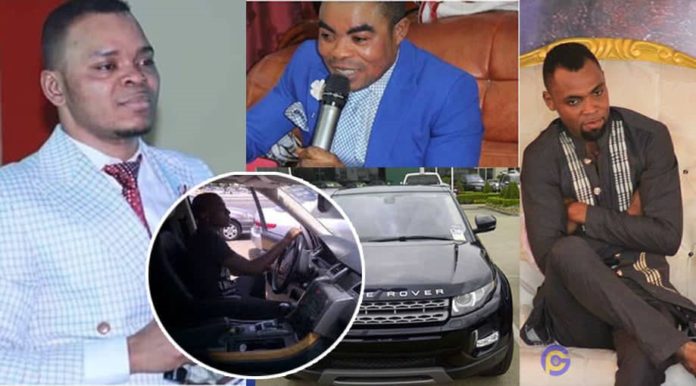 Prophet Kingsley Baah popularly known as Prophet One Blow has apologised to his spiritual father for receiving gifts from Rev Obofour.

Prophet One blow rendered an unqualified apology to his spiritual father, Angel Obinim who is the Head pastor of International Godsway Ministries and explained how he got to Rev Obofour’s church premises.

Rev Obofour who is the founder and leader of Anointed Palace Church (APC) at the birthday celebration of his mother gave out a Range Rover Evoque, a plot of land at Atomic junction and an amount of 5000 cedis to the former junior pastor of Angel Obinim.

This kind gesture by Rev Obofour mesmerized Ghanaians as they could not fathom why someone who has served Angel Obinim for several years is living such a wretched life with no cars and properties.

In a phone conversation with Angel Obinim, Kingsley apologised to him and explained that it wasn’t his intention to go to Rev Obofour’s church.

According to Kingsley, he went to a prayer camp with a friend and on his return to Lashibi, he was invited by Osofo Kennedy to the church.

He also stated that he has never met or been to Rev Obofour’s church so he was very surprised when he received the gifts.

ALSO READ: Nana Appiah Mensah speaks for the first time after being released from jail

Rev Obofour is known for his philanthropic nature by giving out cars and huge sums of money to some celebrities, church members, junior pastors and several others.

Recently, he threw a lavish birthday party for his mother at the Tema branch of his APC church who turned 60 and gave out a four-wheel drive Mazda cars to Kumawood actresses Christiana Awuni and Akyere Bruwaa.