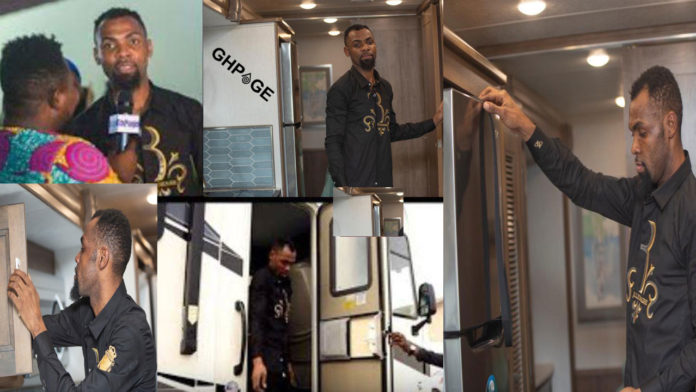 Reverend Obofour, the founder and leader of Anointed Palace Chapel, APC has finally broken his silence on his newly bought Mirada bus which has got the whole country talking.

Speaking exclusively to Rashad on Ghpage TV (On Youtube) Iron Boy as Reverend Obofuor is affectionately called revealed why he chose to add the Mirada bus to his fleet of car collection.

According to the revered man of God, working as a pastor with many branches is not a joke. It’s so stressful that one needs to make maximum use of the little time he/she gets to rest.

He, therefore, bought the bus so that he can have some moments of rest when moving from one branch to the other especially when it’s out of town.

SEE ALSO: New set of Luxurious cars were used during the wedding of Kennedy Osei and Tracy

“It is not easy to supervise over many churches. It’s soo stressful and I get little chance to rest.”

“I bought this bus so that I can rest and do other things whiles moving from one place to the other,” Reverend Obofour told Rashad.

WATCH THE FULL INTERVIEW BELOW

But Ghpage.com checks have confirmed he bought the Coachmen Mirada with an estimated amount of $120,000. That is over GH¢600,000.

Ghanaians got to know Reverend Obofour has bought the bus when he exclusively invited GhPage TV for a tour inside the bus.

The bus has a sitting room with couches, a dining room, a kitchen, toilet and bath, bedroom. Fridges, bar, TV and many others.

After Ghpage TV released the information to the public, the Mirada bus bought by Reverend Obofour has been nicknamed “The Bus Mansion” by Ghanaians.

WATCH TOUR OF THE ‘BUS MANSION’ BELOW

SEE ALSO: Top ten richest pastors in Ghana 2019 and their worth

Obofour is one of the top 4 richest pastors in Ghana as of 2019 with an estimated worth of $6.1 million.