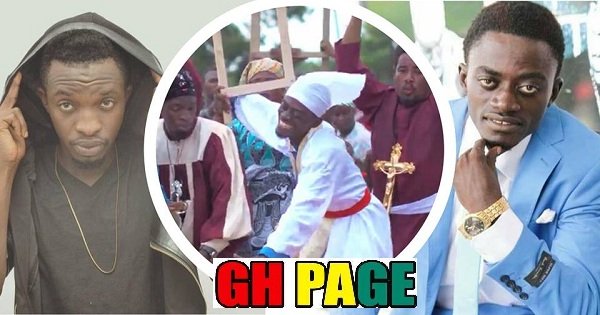 Odehyieba sounded angry and disappointed over what he described as a lie Kwadwo Nkansah Lil Win is trumpeting around.

In a video recording, Ghpage.com spotted on youtube, the ladder singer addressed the issues Kwadwo Nkansah had raised in his new year messages to his fans.

The kumawood entertainer in a live Facebook video had addressed almost all the misfortunes that befell him last year.

Lil Win,in his usual demeanor spoke about his marital issues, Patapaa’s one corner brouhaha and of course, Odehyieba composing the ladder song and yet haven’t received a dime from it yet while he (Lil Win) is playing all the shows with it.

According to Lil Win, he found a place for Odehyieba to stay and did all that he was supposed to do for him.

However, Odehyieba, in his usual humble nature, Odehyieba revealed that all those assertions are untrue.

“Where did you find for me to stay, at where, where? I don’t talk but a human is ‘f*cking. I don’t talk. I am the type when something is wrong with me, it can remain with me and even lose weight on that.”

He went on to address how he composed the ladder song, yet Lil Win is enjoying all the fruit of their labor alone.

“I wrote the ladder song, it became a hit.Now you are playing shows with it, charging sums of money and yet does not give me anything out of that.What pains me more is that he is using another song (3ne3 wo b3 wu) of mine which I had sent to him for a feature that he refused to do, to make money.”

He also added that Lil Win had refused to shake his hand at a party yet behave like an ‘angel’ to the public.

Watch the video below for his reply