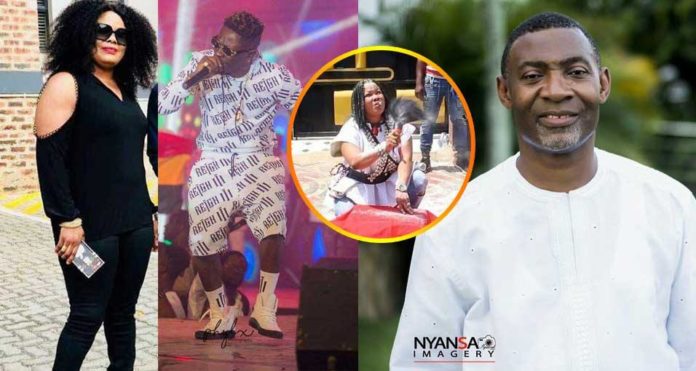 Ghanaian spiritualist Okomfo Agradaa has lashed out at the founder and leader of  Worldwide Miracle Outreach Dr. Lawrence Tetteh for some comments he made after Prophet Adom made a shocking revelation that Shatta Wale is likely to die on the 24th December, 2018 in a car accident.

Dr. Lawrence Tetteh after the prophecy came out and rebuked Prophet Adom prophecy stating that the SM boss was never going to die and went on to state that he was in on the same flight with Shatta and prayed for him and even Shatta Wale told him he was his spiritual father to wish he also adopted him as his spiritual son.

Expressing her anger at the popular evangelist for his comment, she stated that instead of the man of God to pray harder to avert the impending death on the dancehall artiste, he is there saying he is the spiritual father of the “Gringo” hitmaker.

She went on to say that he made the same statement prior to the death of Dancehall sensation Ebony Reigns but at the end of the day Ebony died in the accident as it was predicted which he later came out to brag about buying a coffin and other things used for her burial.

Going forward she asked the Man of God to wake up and pray harder if indeed he is the spiritual father for Shatta Wale because should the prophecy come to pass, Ghanaians won’t forgive.

She also attacked Prophet Adom for also making a fake prophecy to cause fear and panic in the family of the dancehall king,