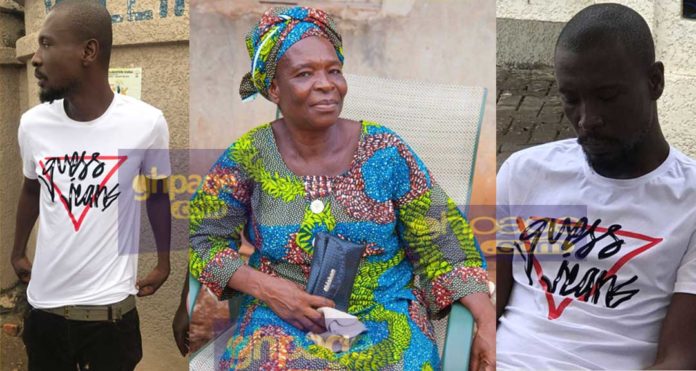 Madam Cecilia Sakiah, the biological mother of legendary Ghanaian rapper, Jerry Anaba known in showbiz as Okomfo Kwaade has broken her silence on the brouhaha surrounding the mental state of the musician.

Speaking to GhPage TV, Madam Cecilia Sakiah explained that, Okomfo Kwaade has been mentally unstable for the past 12 years and all the medical doctors she has taken the son to confirmed it’s caused by drug abuse.

According to the woman, Okomfo Kwaade is not well as he goes about telling people. In fact, his aggressive nature we are seeing from him lately is caused by the fact that he has stopped taking his medication and injections.

Madam Cecilia explained that Okomfo Kwaade has been staying with the CEO of Willingway Foundation located at Kwamo, Ashanti Region, a rehabilitation center for close to 5 years now until his friend, Ogunskele of 2Toff Fame and other friends took him away without informing any of his family members.

Since then, she has tried every means possible to even reach out to her son but Ogunskele keeps blocking her chances with the explanation that, Kwaade is not a child for her mother to dictate to him.

The mother is pleading with the friends of his son who has taken custody of his son to return him to her for her to treat him well.

Madam Cecilia Sakiah is also pleading with Ghanaians and the fans of Kwaade to come to the rescue of his son since he is being corrupted by his friends.

The mother ended by stating she fears a relapse will set in knowing the kind of environment her son stays in and the kind of drug abusers he is staying with now in Accra.

Watch The Full Interview Below