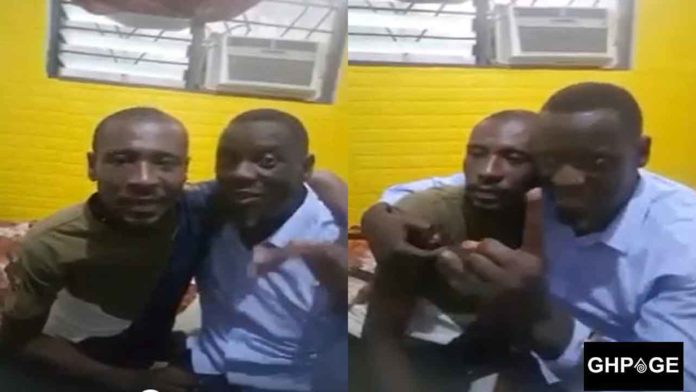 A few days ago, news circulated about the unrecognisable and sad state of veteran hiplife musician Okomfour Kwadee.

According to sources, the musician suffered a relapse after battling with mental issues and was taken to a rehab centre.

Well, it seems Okomfour Kwadee is on his way to a great recovery as he has been spotted with Evangelist Lord Kenya when the latter visited him at the rehab centre.

In a video sighted by GhPage News, Okomfour Kwadee looks excited and normal as he had a hearty conversation with Lord Kenya.

Evangelist Lord Kenya who described Kwadee as his son and brother promised to see him through his recovery.

He also entreated Ghanaians to remember Kwadee in their prayers so the will of God will be manifested in his life.

“This is my son who was given to me from day 1 and I am here with him. God is in control and please pray for us because one day, the biggest brand ever will come to pass”, Evangelist Lord Kenya stated.

ALSO READ: “My performance at S-Concert was electrifying, it’s sad the media is not talking about it” -Okomfo Kwadee

Okomfour Kwadee can be described as one of Ghana’s prolific and great musician and hopefully, he bounces back into the music industry fully recovered.