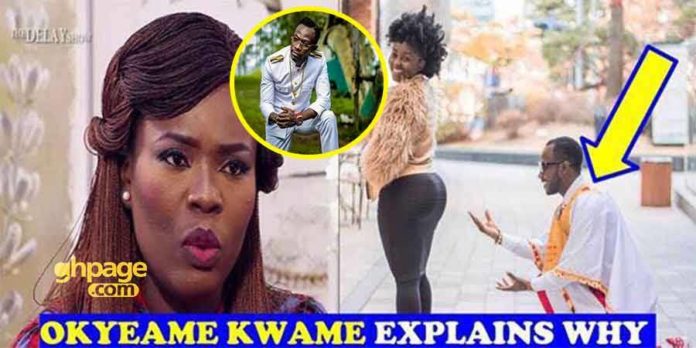 Ghana’s rap doctor, Okyeame Kwame has revealed the trouble he went through after making a statement on the Delay Show which suggests that he would have married the popular Tv host if not for his wife.

Okyeame Kwame who has confessed not once that he would have married Delay if he wasn’t already married couldn’t agree more with the troubling revelations made by Delay during their short chat.

Read also: I am still not married because of gossiping – Delay reveals why

According to Okyeame Kwame, after the interview with Delay on her popular Tv show, he was trolled on social media for saying Delay is “Ghana’s Opera Winfrey”, her show is the most watched Television show in Ghana, her backside is amazing and all of that.

Okyaeme made these statement in a conversation with Delay when he called into a show she hosted as a guest on Adom FM.

Read also: Supa aka Ghana 2Pac shares the sad story of how he lost all his teeth

Okyeame Kwame on the same show revealed that his wife is a witch — but the good one.

He explained his wife’s ‘witchery’ is that of a person with a good intuition — that’s the ability to understand something instinctively, without the need for conscious reasoning.

He continued that, his wife has the inkling to know or consider what’s likely from instinctive feeling rather than conscious reasoning —which has gone a long way to help him take some good business decisions.

Read also: Ghana 2pac, Supa to battle it out with Patapaa

All is not well in the camp of Bullet's Rufftown records. There has been a lot of talk about a supposed...
Read more