Video: Opambour reacts to two pastors who fought over ‘collection’ at Kumasi market 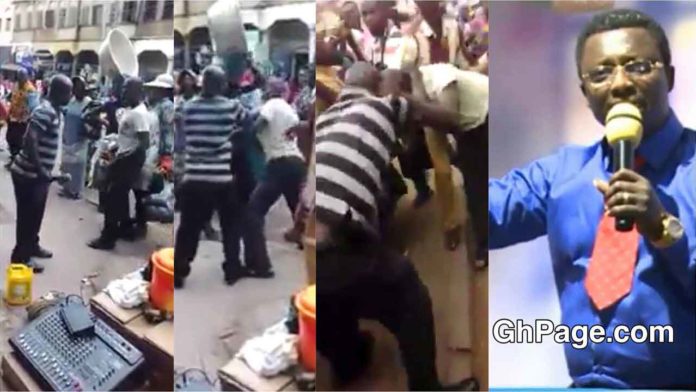 Controversial Prophet, Ebenezer Adarkwa Yiadom, popularly known by many as Opambour has reacted to a video of two pastors who fought over offering at the Kumasi market.

This reaction was in connection to a viral video of two pastors who are believed to be fighting over offering.

According to Opambour, pastors of today have to be careful and vigilant of the things they do in public.

He further admonished that it is best for pastors to have patience in their dealing and should not indulge in disgraceful acts like fighting in public. He could not understand what will make two pastors fight in public. He believes that the act was uncalled for.

To be able to understand what really transpired, Opambour called on one of his junior pastors who is believed to have witnessed what really went on to explain.

According to the junior pastor, one of the pastors involved in the fight seen in the video wearing a white shirt with a bag claims the other pastor had come to hijack the spot where he preaches from, and that was the beginning of everything.

Opambour’s junior pastor also added that the onlookers kept instigating that they fight to prove who reigns supreme instead of asking them to stop. Others also kept reminding them that they are men of God and are not supposed to do that.

Opambour later called on two eyewitnesses who came to confirm that one of the two pastors who they referred to as Pastor Marfo did not in any way say anything to the other pastor who kept insulting him and kept saying he should not take money for preaching the word of God, since the word is not for sale.

Opambour admonished that when pastors speak about people’s negative way of life, they should not see it as an insult to their personality but as an act aimed at reforming them.

Ebenezer Miracle Worship Centre is located at Ahenema Kokoben, a suburb of Kumasi in the Ashanti Region of Ghana.

It was founded and owned by Rev. Ebenezer Opambour Adarkwa Yiadom, popularly known as “Prophet One” or “Asante Moses.”