The Operational difference between Menzgold UK and Menzgold Ghana 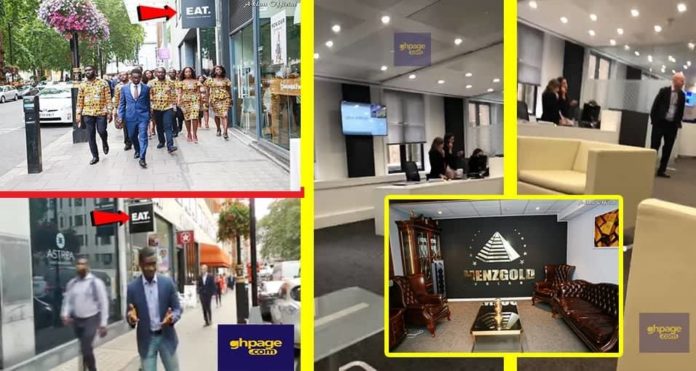 The Menzgold office in the UK which is at the Berkeley Square, May-fair, London has their modus operandi so different from how they operate in Ghana.

Well, with gold as their commodity, customers visit Brew marketing to buy gold, which Brew will hand it to the sister company, Menzgold to invest and trade on it on behalf of the customer.

In the agreement, the customer will be paid a 10% dividends every month from the initial capital he used to buy the ‘gold'( which in the contract is referred to as “Aurum Utalium”).

Now, at the Berkeley Square house in the United Kingdom, the building has hired their offices to a large number of companies which Menzgold happens to be one.

Access to the offices in the building as required is highly restricted and it has a tight security at the lobby.

With an issuance of a name tag, you will then be directed into their office.

On the first floor which is where their office is located, there is a ‘waiting office area’ for the various offices on the floor.

Well, as I sat for about 15 mins waiting for my call, a young lady walked up to me to inquire why I was there. Of course, “to buy gold and ask for more explanations about their services” I answered.

I was told, “all inquiries from customers and any explanations are made via email”. So she gave me an email address, [email protected]

I persisted to get more information which I asked if nothing at all can be explained to me because, on the web, there is a very scanty information about their operations in the UK. Yet, lady reiterated “No, sir, inquiries can only be done through emails.”

The email was sent and it’s yet to be replied.

However, the video attached (below) is a view of their waiting area (as that is the only place that could be captured without being interrupted by the security) and the following is Joy News Israel Laryea’s report when he also visited their office in the UK.

The company before its encounter with SEC which led to its shutdown had produced an unblemished 100% records since its inception last year.

The company essentially offers an investor the opportunity to make huge returns – some 10% every month – on whatever has been invested.

Menzgold converts the cash an investor puts into the scheme into equivalent gold tokens. These tokens are then deposited with the dealership for the monthly interests to kick in.

Successfully offering individuals a sure alternative source of income with their 10% ROI extra value they received.

Touted by some as an innovative business module which needs support, the company claims it trades the gold the investor has willingly agreed to deposit with them on the international market.

Many doubt this claim on grounds that the returns on trading gold on the international market do not fetch enough returns to allow Menzgold to give 10% a month as returns to its investors in Ghana.

The Bank of Ghana and the Precious Minerals Marketing Company (PMMC), meanwhile, have faulted the company’s activities.

However, in a letter dated Sept 7, 2018, the SEC ordered the company to shut down.

In anticipation, many are those who thought as they've seen the new year 2020, all will go on smoothly and their plans...
Read more
Business

Africa Centre for Entrepreneurship and Youth Empowerment (ACEYE), has highlighted strategies to be adopted in the financing and funding of Ghana Railway...
Read more
Editor's Pick