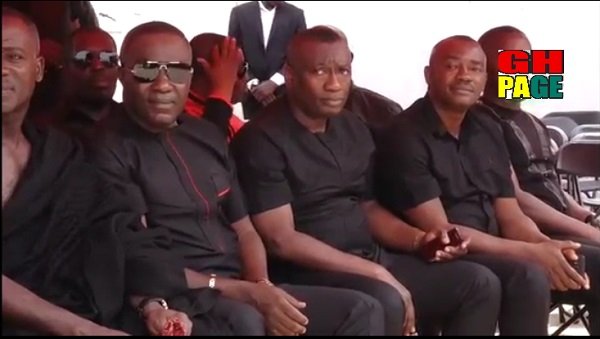 The one-week observation of the unfortunate demise of the ace broadcaster, Kwadwo Asare-Baffuor Acheampong (KABA) is currently underway at the premises of Multimedia.

Family, friends, and staff of Multimedia are all gathered to mark the one week of the passing of Kwadwo Asare-Baffour Acheampong aka KABA.

The CEO of the Despite Group of Companies, Osei Kwame ‘Despite’, together with his brother Dr. Ofori Sarpong have contributed their quota and made some donations to the family of the late Kwadwo Asare Baffour Acheampong during his one-week observation.

The CEO was in the company of his workers and during the announcement of their donation by Odi Ahenkan indicated that his bosses donate GHC 5,000 cedis, 50 boxes of special ice mineral water,30 boxes of special drinks, to help with the funeral arrangement.

On Saturday, November 18, 2017, however, KABA was rushed to the Korle Bu Teaching Hospital after a short illness but he passed, unfortunately. KABA, who until his death was the host of the Asempa FM political talk show programme Ekosii Sen.

He left behind a wife, Valentina Ofori Afriyie and a daughter.

The wife, Valentina was ushered into her seat in tears. The broken woman could not be consoled but with the help of family members, she took her seat at the one-week celebration of her husband.

Also,Kwame Despite reveals his secret of success—Read his advice to the youth