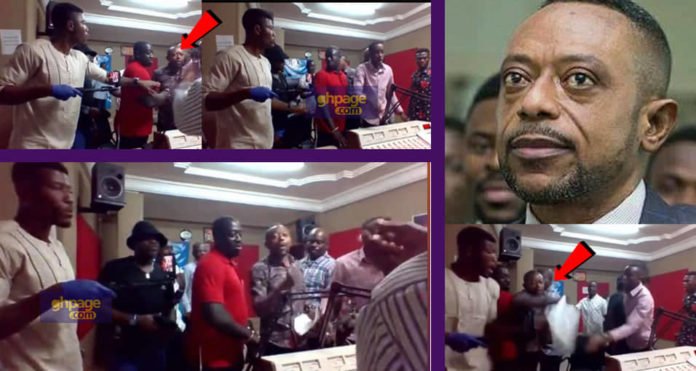 The Founder and leader of Glorious Word Power Ministry, Rev Owusu Bempeh was at the studios of an Accra-based radio station, Hot Fm and ended up destroying some equipment whiles been interviewed.

The man of God got furious after he felt the host of the programme was diverting from the main reason he was at the station and was asking unnecessary questions.

According to Owusu Bempah, he was at the studios to meet Evangelist Dominic Appiah who was at the same radio station earlier to accuse Owusu Bempah of belonging to an occultic group.

“I didn’t come here to be interviewed and asked silly questions. You are acting just like Satan tempting Jesus to turn stone to bread. I am here for that Dominic guy who claims I belong to an occultic group. You just can’t bring people here to tarnish my hard-earned reputation. I came here to meet him”, he angrily said

The man of God stormed out of the studios furiously and ended up destroying a laptop and some few equipments.

This infuriated the man of God and stormed the radio stations with his men with a crowbar and destroyed properties.

Share
Facebook
Twitter
WhatsApp
Pinterest
Previous articleI never said if Shatta Wale organizes his own awards, Stonebwoy will win Dancehall Artist of the Year – Yaa Pono
Next articleThief trapped after trying to escape through a window