Owusu Bempah blasts Badu Kobi as he replies his attacks 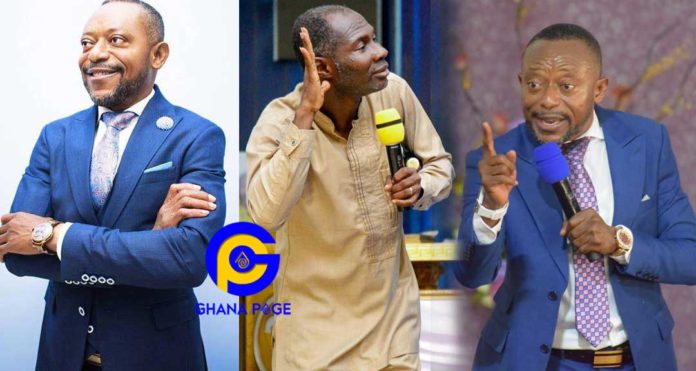 According to Owusu Bempah, if not for the cars Badu Kobi shares to people at his church, no one would have known he is. Badu Kobi claims sharing cars is the only way Ghanaian can identify who Badu Kobi is and nothing else.

Owusu Bempah explained that although Badu Kobi is older than him, he (Owusu Bempah) was his spiritual father but because Badu Kobi hates to be advised, he left his guidance and it’s shocking someone like him who has never achieved anything in the prophetic world could stand up to criticize him.

The renowned man of God who is a known NPP supporter revealed that not even a single prophecy by Badu Kobi has ever materialized yet, he sits on the radio to criticize him (Owusu Bempa) who is a senior prophet.

He further adviced Badu Kobi to get one prophecy to come to pass before he will next time go public and call himself a seasonal prophet as he claims to be.

SEE ALSO: Owusu Bempah has no right to call himself the Nation’s Prophet-Badu Kobi

Reacting to Badu Kobi’s prophecy that the Ghanaian economy will be hard, Owusu Bempah explained that it not a prophecy because God himself stated in the bible that “Getting to the end of time, things will be hard for people” so it is no news at all.

For the past one month, Badu Kobi has been moving from FM station to the other revealing why people are complaining about Nana Addo’s governance. According to him, Nana Addo was never meant to be the president of Ghana and it’s God’s wrath being poured on Ghanaians.

SEE HERE: Akufo-Addo was never meant to be president-Badu Kobi

Badu Kobi also revealed that Owusu Bempah has no right to parade himself as the nation’s prophet because he lacks 3 major spiritual things that authenticate one as the Nation’s Prophet.