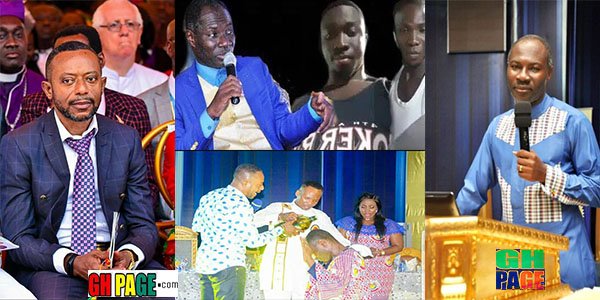 Prophet Emmanuel Badu Kobi is the Founder and leader of the Glorious Waves Church International.

According to Kobi, he wanted to take prophet Elisha Salifu Amoako as his spiritual father but God told him to pick Owusu Bempah instead.

However, there have been recent ‘scuffles‘ between the two ‘father'(Owusu Bempah) and son( Prophet. Badu Kobi) with the former disowning the later.

It started with an audio wherein it a certain woman alleged that Owusu Bempah has slept with her and daughter she mentioned as Yvonne.

Reacting to this, Owusu Bempah fingered Badu Kobi as conspiring with people to spread those lies about him and thus threatened to collapse his church.

This has resulted in several banters between the two camps which each throwing jabs at each other.

READ ALSO:‘I am not into any occultism’— Badu Kobi responds to Owusu Bempah’s several allegations and threats (Video)

The latest to evolve is that from a pastor called Prophet Bright Berchie who described himself as one of the son’s of Owusu Bempah—Together with others sounded a warning to Prophet Badu Kobi.

In a video recording on Facebook, he cautioned the prophet to warn his ‘boys’ such as Pastor Kennedy, Afia Schwarzenneger, Apraku my daughter to refrain from insulting Rev Owusu Bempah.