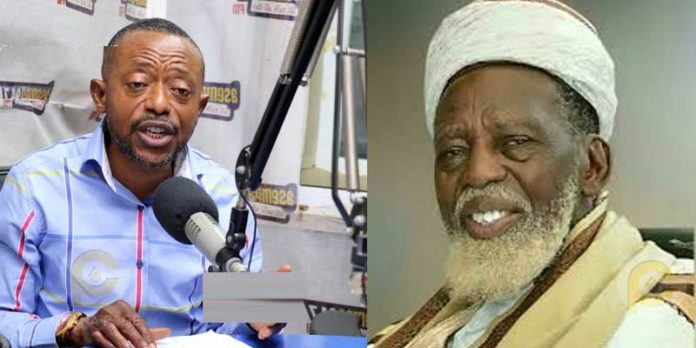 It seems Rev Owusu Bempah has bitten more than he can chew as an Islamic Cleric, Sheikh Iddrisu Toppoh has waded into his death prophecy on National Chief Imam stating that the Leader and Founder of the Glorious Word Ministry have dug his own grave by his prophecy on the death of Chief Imam Sheikh Osman Nuhu Sharubutu.

“We pity Owusu Bempah because he has dug his own grave and very soon he will be buried inside.” The Sheikh said in a post.

In Sheikh Iddrisu’s opinion, Owusu Bempah must pray to reach the age of the Chief Imam.

“The National Chief Imam is 100 years old and his death isn’t a prophecy. Owusu Bempah should only pray to God to grant him even half of the blessed years of Sheikh Nuhu Sharubutu.” He postulated.

Yesterday, some angry Zongo youth in Accra stormed the church of Reverend Isaac Owusu Bempah over his prophecy that Chief Imam Sheikh Osman Nuhu Sharubutu will die this year.

The cutlass-wielding youth numbering about 15 were seen breaking the church billboards at the entrance shouting insults in the Hausa language.

Touching on what the angry youth did at Owusu Bempah’s church, the Islamic Cleric stated that the Muslim youth could have done more.

“I think what the youth did, was even charitable. Next time he will feel the prophecy of the Muslim youths in his body.” He said.

He further called on the Christian leadership in the country to intervene since their silence over the years has given these false prophets the mandate to instil fear into people.

In his view, Owusu Bempah could possibly be waging “psychological warfare”.

“Such psychological warfare we can retaliate too, we have the spiritual arsenal’s at our disposal to retaliate, he’s lucky the national Chief Imam is a kind-hearted father who has called for calm.”

“We want to assure Owusu Bempah and his cohort’s in the Christiandom who are doing stuff to bring the name of Holy Jesus and Christianity to disrepute that next time they won’t go scot-free.”

“How do we allow just a few bunches of criminals to cause fear and panic at the end of every year in the name of prophecy whiles the media gives them prominence?” he queried.

Read also: Hot Atopa tape of a Policeman and his girlfriend goes viral