Owusu Bempah & Kofi Adams confront each other on live radio 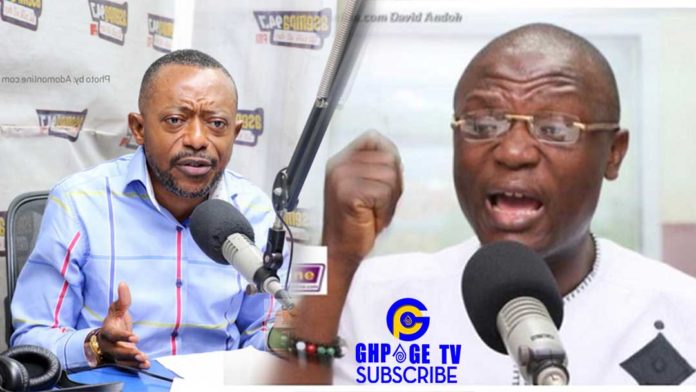 The founder and leader of the Glorious Word and Power Ministry International, Reverend Isaac Owusu Bempah and the former National Organiser of the National Democratic Congress (NDC), Kofi Adams confront each other on live radio over the prophecy on the life of the President of Ghana, Nana Akufo Addo.

The man of God in his latest prophecy stated that some people are planning to assassinate President Akufo Addo and his vice.

According to Owusu Bempah, certain people have been contracted to commit such a hideous crime and that he has personal knowledge of the details of the plot and the persons behind it.

I know Ghanaians would ask if God revealed this to me…I will soon come to your station and give you details of where the meeting was held…A member of the NDC has also confirmed the issue to me and because of that, I am unable to step out. This is not due to fear but I am extremely shocked and alarmed that a former president would plot to kill a sitting president, his vice, myself, Kennedy Agyapong and Chairman Wontumi.

The NDC member told me to be careful. I am also aware the plot was due to my promise to pray for President Nana Addo to ensure he wins the 2020 polls as revealed by God”, the man of God stated.

ALSO READ: Ghana cedi will be stabilized in the next few weeks -Finance Minister

Recently, Kofi Adams has petitioned the Criminal Investigation Department (CID) to invite the man of God for alleging that some people have been contracted to kill the President and his Vice.

The former National Organizer wants the CID to invite Rev Owusu Bempah to assist in investigations and point out the people who have been contracted to commit such crime.

However, Rev Owusu Bempah and Kofi Adams were interviewed over the above allegations with the former stating that he is ever ready to go to the CID to assist in the investigation.

He also stated that he will also petition the CID to invite the National Democratic Congress over the cause of death of former President Evans Atta Mills.

According to him, the late President was a property of Ghana and that Ghanaians must be informed about the cause of death of the former president.